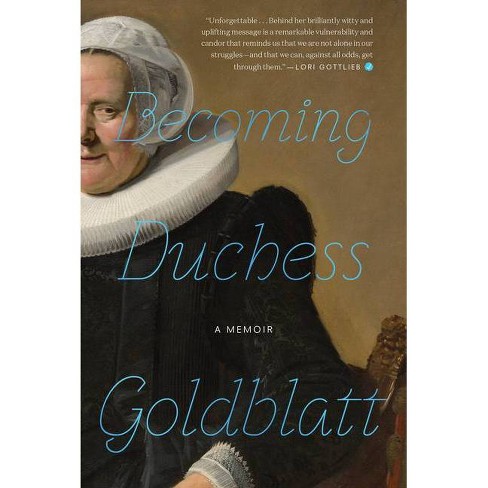 Praise for Becoming Duchess Goldblatt
Named one of the New York Times' "20 Books We're Watching For in 2020"
Named a Most Anticipated Book of 2020by Real Simple "A fascinating memoir by a 21st-century original."--Kirkus, STARRED review "A surprising, joyful story of social media at its best."--Booklist "After reading this unforgettable memoir, I figured out who Duchess Goldblatt is: all of us. Behind her brilliantly witty and uplifting message is a remarkable vulnerability and candor that reminds us that we are not alone in our struggles--and that we can, against all odds, get through them. As though casting a magic spell on her readers, she moves, inspires, and connects us through her unvarnished humanity. It was, for this therapist, a form of therapy I didn't know I needed."
--Lori Gottlieb, New York Times-bestselling author of Maybe You Should Talk to Someone "This book is, like Duchess Goldblatt herself, nothing you expect and everything you need. It's a memoir not just of one life (failures and triumphs laid bare) but also of a second self--its creation, its evolution, its improbable splendor. We may never deserve Duchess Goldblatt and her magnanimity, but her inventor most certainly does."
--Rebecca Makkai, author of the Pulitzer Prize and National Book Award finalist The Great Believers "What an unexpected marvel of a book, funny and poignant and--dare I say--sweet. It's fashionable to bash social media, but without it, we wouldn't have Duchess and that would be a damn shame."--Laura Lippman, New York Times-bestselling author of Lady in the Lake and Sunburn "The question I am most often asked by readers out in the world, is, 'Who is Duchess Goldblatt?' The correct answer is, 'She is the Universe's secret admirer, a made-up & hilarious octogenarian who lives on Twitter, who delivers love and demands it in equal, astonishing measure.' What they mean is: what's her real identity? This book does not precisely reveal that. Instead it's the actual memoir of a fictional person, a meditation on what it means to start again in the oddest way possible. It is also heartbreaking, funny, gorgeously written, surprising, brilliant, profound, the book only Duchess Goldblatt herself could have written."
--Elizabeth McCracken, bestselling author of Bowlaway and The Giant's House "A memoir that is, ironically, about the power a fiction can exert on us all, she tells us a story about late Capitalism, social media, the financial crisis, and America, and being a woman trying to survive it all. Whatever someone expects this to be, it isn't, and that is, perhaps, the real secret to the Duchess underneath it all."
--Alexander Chee, bestselling author of The Queen of the Night and How to Write an Autobiographical Novel
"Becoming Duchess Goldblatt is a story about the importance of community--of kindness, acceptance, and friendship. The world would be a better place if we all became Duchess Goldblatt."--Lyle Lovett
"Surely you follow Duchess Goldblatt on Twitter? If not, do yourself a favor and hit that button to subscribe to her delightful musings. In Becoming Duchess Goldblatt, the Duchess' real-life anonymous creator writes about crafting one of Twitter's (if not the Internet's) best accounts and healing herself in the process."
--Real Simple
If the item details above aren’t accurate or complete, we want to know about it. Report incorrect product info.