Before We Disappear - by Shaun David Hutchinson (Hardcover) 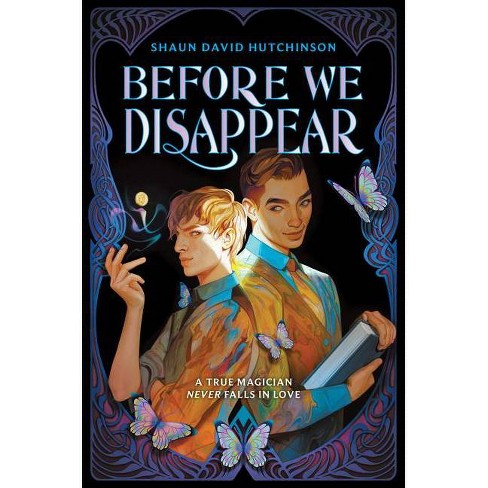 It's a new star-crossed romance about the magic of first love from the acclaimed author of We Are the Ants and Brave Face, Shaun David Hutchinson.

Jack Nevin's clever trickery and moral flexibility make him the perfect assistant to the Enchantress, one of the most well-known stage magicians in turn-of-the-nineteenth-century Europe. Without Jack's steady supply of stolen tricks, the Enchantress's fame would have burned out long ago.

But when Jack's thievery catches up to them, they're forced to flee to America to find their fortune. Luckily, the Enchantress is able to arrange a set of sold-out shows at Seattle's Alaska-Yukon-Pacific World's Fair Exposition. She's convinced they're going to rich and famous until a new magician arrives on the scene. Performing tricks that defy the imagination, Laszlo's show overshadows the Enchantress, leaving Jack no choice but to hunt for the secrets to his otherworldly illusions. But what Jack uncovers isn't at all what he expected.

Behind Laszlo's tricks is Wilhelm--a boy that can seemingly perform real magic. Jack and Wilhelm have an instant connection, and as the rivalry between the Enchantress and Laszlo grows, so too does Jack and Wilhelm's affection. But can Jack choose between the woman who gave him a life and the boy who is offering him everything?

It's a stirring tale about the magic of love from award-winning author Shaun David Hutchinson.

"Like all good magic acts, the novel will keep readers on the edges of their seats as they follow the twists and double-crosses that fill the lives of con artists and magicians. The book flawlessly combines magic and suspense in a well-crafted heist story that's sweetly sprinkled with queer romances." -- Kirkus Reviews (starred review)

"Hutchinson's novel has an intriguing setup and historical milieu, and the final trick, which relies on magic, fraud, planning, and friendship, makes for a bravado ending." -- Publishers Weekly

"Hutchinson's evocative writing [...] delights in the reality of found families" -- Bulletin of the Center for Children's Books

"Its strength lies in the captivating relationship between Jack and Wil. Now there's real magic." -- Booklist

Spin Me Right Round - by David Valdes

The Darkness Outside Us - by Eliot Schrefer

Out of the Blue - by Jason June (Hardcover)

So This Is Ever After - by F T Lukens

This Is Why They Hate Us - by Aaron H Aceves (Hardcover)

If This Gets Out - by Sophie Gonzales & Cale Dietrich

The State of Us - by Shaun David Hutchinson (Paperback)

We Are the Ants - by Shaun David Hutchinson