Behind the Magic Curtain - by T K Thorne (Hardcover) 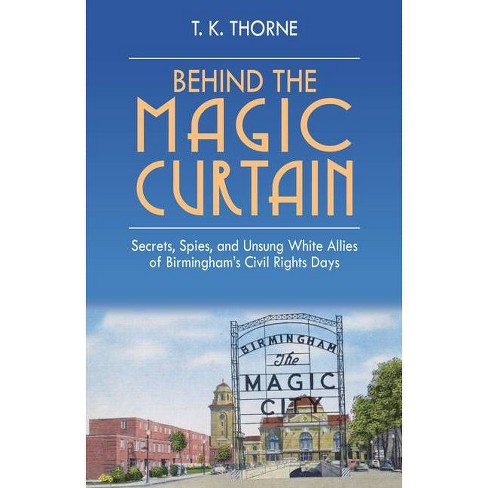 Behind the Magic Curtain: Secrets, Spies, and Unsung White Allies of Birmingham's Civil Rights Days is a remarkable look at a historic city enmeshed in racial tensions, revealing untold or forgotten stories of secret deals, law enforcement intrigue, and courage alongside pivotal events that would sweep change across the nation.

Behind the Magic Curtain: Secrets, Spies, and Unsung White Allies of Birmingham's Civil Rights Days is a remarkable look at a historic city enmeshed in racial tensions, revealing untold or forgotten stories of secret deals, law enforcement intrigue, and courage alongside pivotal events that would sweep change across the nation. Birmingham, Alabama gave birth to momentous events that spawned the Civil Rights Act of 1964 and affected world history. But that is not why it is known as The Magic City. It earned that nickname with its meteoric rise from a cornfield valley to an industrial boomtown in the late 1800s. Images of snarling dogs and fire hoses of the 1960s define popular perception of the city, obscuring the complexity of race relations in a tumultuous time and the contributions of white citizens who quietly or boldly influenced social change. Behind the Magic Curtain peels back history's veil to reveal little-known or never-told stories of an intriguing cast of characters that include not only progressive members of the Jewish, Christian, and educational communities, but also a racist businessman and a Ku Klux Klan member, who, in an ironic twist, helped bring about justice and forward racial equality and civil rights. Woven throughout the book are the firsthand recollections of a reporter with the state's major newspaper of the time. Embedded with law enforcement, he reveals the fascinating details of their secret wiretapping and intelligence operations. With a deft hand, Thorne offers the insight that can be gained from understanding little-known but important perspectives, painting a multihued portrait of a city that has figured so prominently in history, but which so few really know.

An engrossing book and invaluable companion to Calvin Trillin's Jackson, 1964, Jack Nelson's Terror in the Night: The Klan's Campaign Against the Jews, and others. -- Moment


Behind the Magic Curtain is a deeply rooted insider's examination. Thorne, an Alabama native, is uniquely positioned to tell this story of heroes and villains, of the bravery, timidity, and cowardice of many people along the continuum between them. Coming as the multi-racial anti-racist movement emerges, this is an incredibly valuable and instructive book. -- New York Journal of Books

In Behind the Magic Curtain, T. K. Thorne introduces us to those who operated behind the scenes in the civil rights movement in Alabama, shedding light on the individual moral complexities of these participants--some firebrands, some reluctant players, and some predators who worked for their own gain. This journalistic exploration of a complicated time in Alabama's social history will sit comfortably on the shelf next to histories by Diane McWhorter, Glenn Eskew, and Taylor Branch. -- Anthony Grooms, author of Bombingham and The Vain Conversation

Deeply engaging, Behind the Magic Curtain tells a forgotten part of the Birmingham story, prompting many memories. Lively writing brings the characters and settings to life and provides a picture of the white community's role in all its complexity. This is a treasure trove of stories not well known to the general public. In particular, journalist Tom Lankford's sleuthing and the machinations of the Birmingham Police Department, along with the risk-averse role of the local newspapers and a full-blown portrait of the inscrutable Birmingham News VIP Vincent Townsend, make for a fascinating read. -- Odessa Woolfolk, educator, community activist, and founding president of the Birmingham Civil Rights Institute

T. K. Thorne shares an important story of a dangerous time in Birmingham, Alabama, when it was known as America's most segregated city. The dramatic events of the period are well remembered, but less so are the stories of those civic leaders and citizens, Black and white, who did their part to dissolve Jim Crow. Behind the Magic Curtain shows the world the importance of the people who inspire improvement and change within their own culture, working behind the scenes with courage and principle. -- Chervis Isom, author of The Newspaper Boy: Coming of Age in Birmingham, Alabama, During the Civil Rights Era

Novelist and former Birmingham police captain T. K. Thorne demonstrates there was more to the Birmingham of the civil rights era than Bull Connor, Klansmen, and African American protestors. Behind that "magic curtain," an ethnically diverse group from downtown to the surrounding bedroom communities of ministers, priests, rabbis, newspaper reporters, and housewives comprised a community belying monikers like "Bombingham" and "Murder Capital of America" and fighting for justice in the Magic City. -- Earl Tilford, author of Turning the Tide: The University of Alabama in the 1960s

T. K. writes like a seasoned news editor, meticulously hunting down facts and laying out the context in a colorful, intriguing account. Behind the Magic Curtain documents many untold stories and faithfully relates my own personal, unforgettable memories of a time of racial transition in Birmingham. -- Tom Lankford, former journalist, The Birmingham News

T. K. Thorne has hit another home run with Behind the Magic Curtain. For five and a half decades we have read accounts of the civil rights era in Birmingham and Selma written by those with a particular ax to grind. Thorne is an excellent reporter, recognizing the nuances that outsiders or opinionated journalists could not see or chose to overlook. Her reading and especially her interviews over the past several years have been remarkable, allowing her to give a far more accurate chronicle than we have had before. For those who want to know the secrets of what really went on behind the "magic curtain" in those pivotal nation-changing days, days that brought the Civil Rights Bill in 1964 and the Voting Rights Bill in 1965, this is an important book to read. -- Douglas M. Carpenter, retired Episcopal minister and son of Alabama's Episcopal bishop, C. C. J. Carpenter
If the item details above aren’t accurate or complete, we want to know about it. Report incorrect product info.