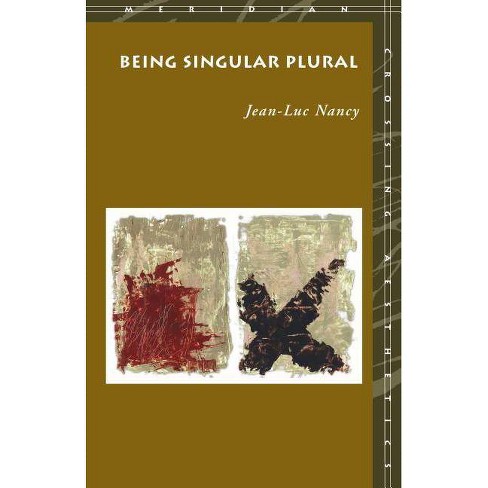 $23.49
0 out of 5 stars with 0 reviews
be the first!be the first! ratings
Shipping
Free standard shipping with RedCard
Help us improve this page

This book, by one of the most innovative and challenging contemporary thinkers, consists of an extensive essay from which the book takes its title and five shorter essays that are internally related to "Being Singular Plural."

One of the strongest strands in Nancy's philosophy is his attempt to rethink community and the very idea of the social in a way that does not ground these ideas in some individual subject or subjectivity. The fundamental argument of the book is that being is always "being with," that "I" is not prior to "we," that existence is essentially co-existence. Nancy thinks of this "being-with" not as a comfortable enclosure in a pre-existing group, but as a mutual abandonment and exposure to each other, one that would preserve the "I" and its freedom in a mode of imagining community as neither a "society of spectacle" nor via some form of authenticity.

The five shorter essays impressively translate the philosophical insight of "Being Singular Plural" into sophisticated discussions of national sovereignty, war and technology, identity politics, the Gulf War, and the tragic plight of Sarajevo. The essay "Eulogy for the Mï¿½lï¿½e," in particular, is a brilliant discussion of identity and hybridism that resonates with many contemporary social concerns.

As Nancy moves through the exposition of his central concern, being-with, he engages a number of other important issues, including current notions of the "other" and "self" that are relevant to psychoanalytic, political, and multicultural concepts. He also offers astonishingly original reinterpretations of major philosophical positions, such as Nietzsche's doctrine of "eternal recurrence," Descartes's "cogito," and the nature of language and meaning.