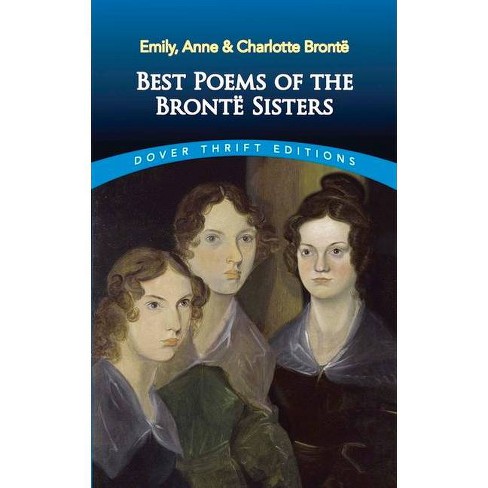 Among the most talented siblings in English literary history, the Bronte sisters are best known for their novels. However, the sisters also composed a great deal of fine poetry. This volume contains a careful selection of 47 poems by all three. These poems represent a superb introduction to a lesser-known aspect of the Bronte's remarkable literary production.

In this collection of their poetry, published under gender-concealing pseudonyms, we get an intimate glimpse of their fears, hopes, faith, and desires. -- Haunted Library
This collection is not only for fans of the Brontë Sisters and classic rhyming poetry but also for readers that crave heartbreaking gothic angst. -- Eastside Middle School
Among the most talented siblings in English literary history, the Brontë sisters are best remembered for their novels: Emily's Wuthering Heights, Charlotte's Jane Eyre, and Anne's Tenant of Wildfell Hall, among other works. It is less well known that the sisters also composed a considerable amount of fine poetry.
This volume contains forty-seven poems by all three sisters. Selections include Charlotte's Presentiment, Passion, two poems on the deaths of her sisters, and six more. There are twenty-three poems by Emily (considered the best poet of the three), including Faith and Despondency and No Coward Soul Is Mine. The works of all three sisters share the qualities of intelligence, awareness, and heartfelt emotion, expressed in simple, highly readable verse. Gathered in this handy, inexpensive collection, the poems represent a superb introduction to a lesser-known aspect of the Brontës' literary art.

Despite the tragic brevity of their lives, the Brontë sisters created some of the greatest works of the early Victorian era. Their novels include Jane Eyre (Charlotte, 1816-55), Wuthering Heights (Emily, 1818-48), and Agnes Grey (Anne, 1820-49).
If the item details above aren’t accurate or complete, we want to know about it. Report incorrect product info.