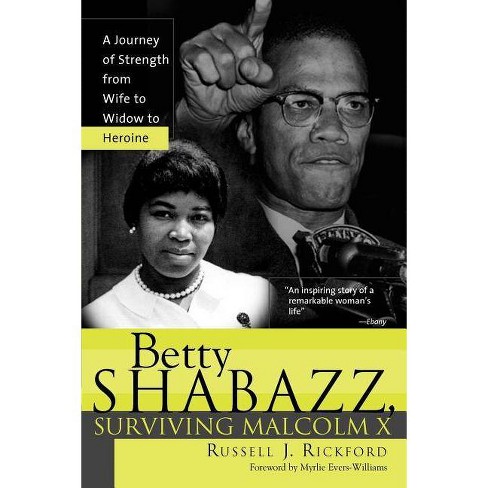 Originally published as: Betty Shabazz: a remarkable story of survival and faith before and after Malcolm X.

The gunmen rose from the crowd and set their sights on Malcolm X. The thunder of shotgun blasts ripped through the ballroom, and Betty Shabazz turned to see her husband float backward, keel over and crash to the ballroom stage. She grabbed her children, hurling them beneath a booth and shielding them with her body while the room erupted into screams and chaos. As she lay there squeezing her family, the Betty Shabazz who was the dutiful and obedient wife of the Civil Rights Movement's most feared leader ceased to be, and the woman who emerged would become one of the greatest heroines of our day. Betty Shabazz, Surviving Malcolm X is the first major biography of Dr. Betty Shabazz, the unsung and controversial champion of the Civil Rights era. From her early marriage to black liberation's raging voice through her evolution into a powerful and outspoken African-American leader, Betty Shabazz was in constant struggle to bring freedom and justice to her people. Yet, at times her greatest fight was to struggle through tragedy and hold on to her faith amidst the stereotypes forced on her by a culture of racism and the very people she was trying to liberate. To read Betty Shabazz, Surviving Malcolm X is to experience this remarkable life. With eloquent and intimate prose, Russell J. Rickford puts you on the scene as a young Betty Sanders is taken in by foster parents after a troubled childhood. You are there as Malcolm X comes home from a hard day of railing against oppression to hug his children, dote on his wife and laugh. You dive under the table at the Audubon Ballroom as bullets strike Malcolm down. You struggle with Betty Shabazz as she fights to raise six girls alone while earning a doctorate. You stand triumphant with her as she claims her own individuality and fights to build respect for Malcolm. And you stand watch with her daughters as Betty passes away, a victim of yet another tragedy, but this time after a life lived full. Russell J. Rickford has conducted extensive research to compile this biography, interviewing more than seventy of Betty Shabazz's family members, friends, colleagues and contemporaries as well as researching countless records and documents, including recently declassified FBI, CIA and New York Police files. This is the first complete look at the life of Betty Shabazz and a new insight into the man who was known as Malcolm X. Betty Shabazz is the story of a strong woman who faced incredible tragedy and emerged triumphant, compassionate and always full of life. In the end, it is the story of a nation torn apart by hatred learning to heal and forgive.