Beyond Contempt - by Erica Etelson (Paperback) 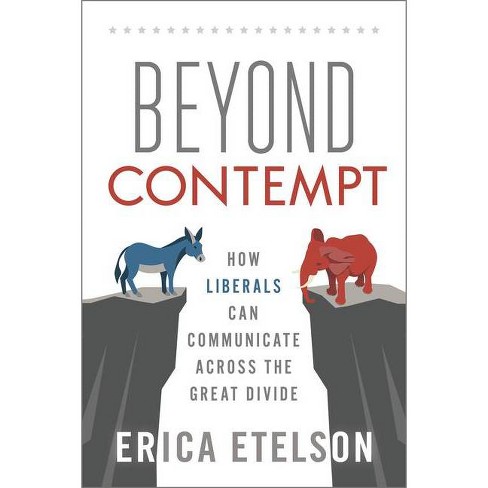 $15.39
0 out of 5 stars with 0 reviews
be the first!be the first! ratings
Shipping
Free standard shipping with RedCard
Help us improve this page

How liberals can talk with, and listen to, Trump supporters without blowing a fuse

Whether you're debating a talk show host, co-worker, or "Fox addicted" Uncle Ralph at Thanksgiving, this book will teach you how to reach people's minds and hearts.... Brilliant!!
-- Thom Hartmann, NY Times bestselling author and America's #1 progressive talk show host

[An] insightful exploration of how to connect with people, bridge divides, and communicate effectively across differences.
-- Matt Morrison, executive director, Working America, AFL-CIO

LIBERAL AND PROGRESSIVE frustration, grief, and alarm over Trump's destructive political agenda and behavior have prompted mounting disdain for Trump supporters and other conservatives. This reaction is contributing to political polarization and unwittingly serving to strengthen Trump's hand as he sows divisiveness and hatred.

In Beyond Contempt , Erica Etelson shows us how to communicate respectfully, passionately, and effectively across the political divide without soft-pedaling our beliefs.

Providing detailed instruction and dozens of examples of how to discuss hot button topics, Beyond Contempt is a must-have guide to productive dialogue that can defuse hostility, build trust, and open hearts and minds in unexpected ways.

An excellent resource for any liberal who wants to heal our divided nation.
-- David Campt, principal, The White Ally Toolkit, an initiative of The Dialogue Company

ERICA ETELSON is a writer, community activist, and certified Powerful Non-Defensive Communication(TM) facilitator. A former human rights attorney, her articles have appeared in the San Francisco Chronicle , Progressive Populist , San Jose Mercury News , Truthout , and Alternet . She lives with her husband and son in Berkeley, California.