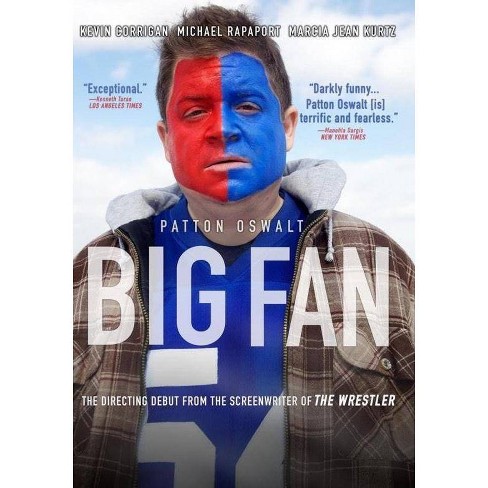 $9.99
MSRP$13.99
undefined out of 5 stars with 0 reviews
be the first!be the first! ratings
Help us improve this page

Paul Aufiero (PATTON OSWALT), a 35-year-old parking garage attendant from Staten Island, is the self-described "world's biggest New York Giants fan." He lives at home with his mother (MARCIA JEAN KURTZ), spending his off hours calling in to local sports-radio station 760 The Zone, where he rants in support of his beloved team, often against his mysterious on-air rival, Eagles fan Philadelphia Phil (MICHAEL RAPAPORT).

His family berates him for doing nothing with his life, but they don't understand the depth of his love of the Giants or the responsibility his fandom carries. One night, Paul and his best friend Sal (KEVIN CORRIGAN) spot Giants star linebacker Quantrell Bishop (JONATHAN HAMM) at a gas station in their neighborhood. They impulsively follow his limo into Manhattan, to a strip club, where they hang in the background, agog at their hero. Paul cautiously decides to approach him, stepping into the rarefied air of football stardom -- and things do not go as planned.

The fallout of this chance encounter brings Paul's world crashing down around him as his family, the team, the media and the authorities engage in a tug of war over Paul, testing his allegiances and calling into question everything he believes in. Meanwhile, the
Giants march toward a late-season showdown with the Eagles, unaware that sometimes the most brutal struggles take place far from the field of play.

Following up his first filmed screenplay (''The Wrestler''), writer-director Robert Siegel once again demonstrates a unique and potent vision of the human experience, in all of it its harsh truths and hopeful humanity.
If the item details above aren’t accurate or complete, we want to know about it. Report incorrect product info.