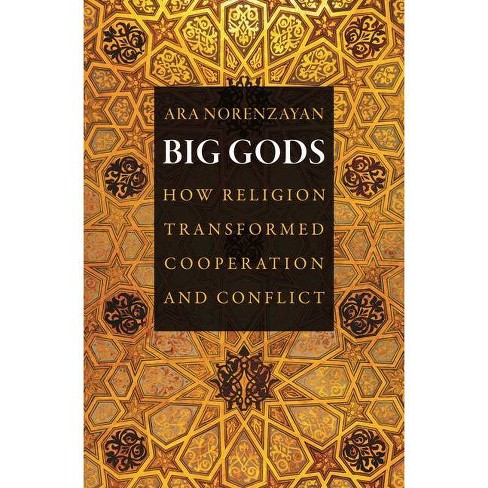 "People love origin stories, and this is ours--a fascinating and accessible account of how Big Gods helped us make the leap from hunter-gatherers to gigantic and religiously diverse societies. But this book is not just about the past. Norenzayan gives us a nuanced account of secularism, and offers us some surprising tools we can use to create more ethical organizations and societies going forward."--Jonathan Haidt, author of The Righteous Mind: Why Good People Are Divided by Politics and Religion

"Does God make us good? In this fascinating new book, Ara Norenzayan explores how the invention of Big Gods--powerful and omniscient moralizing deities--has transformed the world. Replete with insights about morality, cooperation, faith, atheism, and much more, Big Gods will change the way we think about human nature and human society."--Paul Bloom, author of Just Babies: The Origins of Good and Evil

"Of all the topics forbidden debate in polite company, religion is the last taboo. This brave, lucid, balanced blend of compassion and science tackles our most cherished values and most intractable disputes. Big Gods sheds light on the cultural evolution of sacred watchers who arguably make us better humans. And it opens the door to explain how and when secular institutions can do the same. For all of us who worry about the role of religion in the modern world, this is a must-read, original milestone."--Susan T. Fiske, coauthor of Social Cognition: From Brains to Culture

"In this bold and important work, the brilliant young social scientist Ara Norenzayan offers a profound new perspective on religion and atheism, arguing that some gods were more effective than others at promoting trust and cooperation among strangers. The rich narrative ranges all over the world, covering not only religious people and the difference between big and little gods but also the puzzling durability of widespread prejudice against atheists. Packed with information extending from international social trends to findings from scientific experiments, this deeply thought-provoking book will change the way you understand the connection between religion and social life."--Roy F. Baumeister, coauthor of Willpower: Rediscovering the Greatest Human Strength

"This is by far the most accessible and comprehensive synthesis of the new social and cognitive science of religion. Ara Norenzayan combines ingenious cross-cultural experiments and judicious historical analysis to give an original evolutionary account of the civilization-creating idea of Big Gods. He also provides a compelling exploration of the ongoing global competition for humanity's heart and mind between the monotheisms and various forms of atheism that represent God's secular offspring, including the great ideologies of the modern era and perhaps science itself."--Scott Atran, author of In Gods We Trust: The Evolutionary Landscape of Religion

"In a time of heated debate about the origin and function of religion, Ara Norenzayan provides a much-needed, well-written argument based on extensive research. The data reveal how religion impacts human behavior. His view that an omniscient God is our own creation designed to deal with the problem of freeriders deserves much more attention. It brings faith closer to where Darwin thought it belonged, in the sphere of social life and cooperation."--Frans de Waal, author of The Bonobo and the Atheist

"This is a terrific book. Authoritative, clear, and written in a straightforward, entertaining style, it deals with a problem of great interest to a wide range of general readers and academics, including psychologists, anthropologists, historians, and sociologists."--Robert Boyd, coauthor of Not by Genes Alone: How Culture Transformed Human Evolution