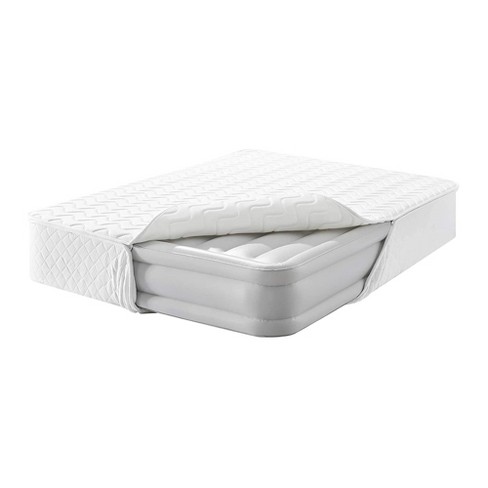 Enjoy the ultimate sleeping experience with the 14-Inch Inflatable Full Sized Mattress from BIKAHOM. Designed for your comfort, this air mattress provides the exact level of support your body needs. Stay-firm technology prevents this air bed from stretching and losing air so you can comfortably sleep uninterrupted through the night. The included mattress cover lets you feel like your lying on your mattress at home. Built-in electric pumps with separate lumbar, head, and foot adjustments allow you to customize the comfort level and firmness in each chamber for your ideal comfort. Raised edge support provides a stable and secure sleeping surface, keeping bedding from falling off during the night. The no-tip, stabilizing base ensures that the bed stays firmly in place whether you use this air mattress while camping or for guests in the spare room. Keep comfortable through the night with the 14-Inch Inflatable Full Sized Mattress from BIKAHOM.
If the item details above aren’t accurate or complete, we want to know about it.

Q: what is the height measurements when it is not inflated, trying to determine if i can us with a sofa bed and store in the sofa

submitted by oismail - 8 months ago
See all questions (1)

1 out of 5 stars
Would not recommend
Jeff - 1 month ago
Had guest use it and it already received a leak even with the protective cover on it. My guest woke up on floor after three days of use.
Did you find this review helpful?

1 out of 5 stars
Would not recommend
Anon - 2 months ago
Squeaks like crazy, purchased it for the comforter part, but it makes a horrendous noise with it on, but a bit less when off. Company did not reply to my email, left with an expensive unreturnable air bed.
Did you find this review helpful?

5 out of 5 stars
madiwolfe92 - 9 months ago
originally posted on Spreetail, LLC

[This review was collected as part of a promotion.] I love the quality of this mattress and how easy it was to use! Im always camping/ staying over at my relatives so this came in handy! Sleep is always important so i was pleased with the comfort it provided.
2 guests found this review helpful. Did you?

5 out of 5 stars
LizzieLaine - 9 months ago
originally posted on Spreetail, LLC

[This review was collected as part of a promotion.] The BIKAHOM Bi-Comfer 14 Inch Inflatable Mattress with Built In Air Pump is super easy to set up and perfect for guests and/or camping. After unrolling the mattress, just open up the compartment of the built in pump, pull out the cord, plug it into your power supply and turn the knob to inflate. The pump is a little loud, but not to bad. You can leave it plugged in or unplug the cord and store it in the compartment in the pump after it is inflated. When you are finished using the mattress, plug it in(if it isn’t already) and just turn the knob to deflate, after just a couple of minutes it is done. The mattress cover is very nice and makes it look like a real plush mattress. I found it to be comfortable and slept well on it. It is a little bouncy when another person moves around on it, but not to bad for me. I found the edges to not be very strong, but you will be fine as long as you do not sit or lay directly on the edge, just scootch over some and it is all good.
5 guests found this review helpful. Did you?

5 out of 5 stars
Rpfuller89 - 9 months ago
originally posted on Spreetail, LLC

[This review was collected as part of a promotion.] The BIKAHOM Inflatable Mattress is really one of the best air mattresses I've had. The built in pump alone is so convenient and makes using quick and easy. It fills up very fast with little effort. Once completed the comforter on top makes all the difference. It's soft like a real bed, breathable and easy to get comfortable on. No more layers below just to get a bed like feel. It's an awesome product to have camping or even just for a living room slumber party.
3 guests found this review helpful. Did you?

5 out of 5 stars
Sarah85 - 10 months ago
originally posted on Spreetail, LLC

[This review was collected as part of a promotion.] This is a nice quality air mattress, we've had this set up in our living room for over a week and it's still going strong! It was super easy to set up, my 12 year old was able to set it up by himself without any help. I love that it comes with a built in pump and a cover.
3 guests found this review helpful. Did you?

5 out of 5 stars
Aedri - 10 months ago
originally posted on Spreetail, LLC

[This review was collected as part of a promotion.] This is a great air mattress! And it comes with a cover, which I have never seen before. My husband and I get a lot of out of town guests, and I feel like I am always buy an air mattress. This mattress is perfect! It’s easy to inflate and deflate, it’s sturdy, and from what I am told, it’s very comfortable!
4 guests found this review helpful. Did you?

5 out of 5 stars
PrimeK - 10 months ago
originally posted on Spreetail, LLC

[This review was collected as part of a promotion.] One of the best sleeps on an air mattress. My brother was over and he had the chance to sleep on the mattress he said it was comfortable and wasn’t nosey when he moved throughout the night. The air also stayed in and stayed full throughout the night as well.
4 guests found this review helpful. Did you?

5 out of 5 stars
Mainej82 - 10 months ago
originally posted on Spreetail, LLC

[This review was collected as part of a promotion.] Very easy to set up can in a box with air mattress and foam bedding rolled up inside. I love it I used it for a movie night with the kids.very spacious and comfortable. Adjustable to your liking and unlike many air mattresses you won’t find yourself up in the middle of the night adding more air or on the floor due to air seeping out. His is really a top of the line air mattress great quality.
4 guests found this review helpful. Did you?

Perfect for our house guests!

5 out of 5 stars
maggie07 - 10 months ago
originally posted on Spreetail, LLC

[This review was collected as part of a promotion.] Our spare bedroom serves as my home office and we don’t have an actual bed so in preparation of our recent house guests I needed an air mattress that was easy to set up and folds up nicely to store. I selected this one and am so happy I did; not only is it at a good price point, but the built in-pump makes this super easy to use. Laying on it is quite comfortable, though I probably wouldn’t use it daily, but works on more of an as needed basis. This stores perfectly in our basement and awaits the next guest!
4 guests found this review helpful. Did you?

5 out of 5 stars
GypsyJunction88 - 10 months ago
originally posted on Spreetail, LLC

[This review was collected as part of a promotion.] I didn't know that I could actually enjoy an air mattress as much as I do this one. We have had old school air mattresses that have to be manually pumped or plug it in with another pump and hope to have the air stay in enough to screw the cap on. Those days are gone! I have nothing but good things to say about this. 1) The fill time. Literally takes less than 3 minutes to fill completely. Open the cover, pull out the plug, plug it in, and turn the knob to inflate. When it is done, flip the knob to off. Tuck the cord back in and cover the lid. 2) Instead of waiting for it to deflate and roll around on it like a hippo playing in water, you turn the knob to deflate and again, it deflates just as fast as it inflates. 3) The outside cover is actually soft and provides a protective border from the actual mattress. This allows you to have less chance of puncturing it. Although it does come with patches; as long as you aren't rough with it and keep the cover on, I don't think you should have to worry about holes. 4) It's comfortable. It may be full sized, but you can fit two people comfortably. The biggest like is that with the cover, when one or the other moves, you don't have the sound of rubber moving around. That squeaky feeling wakes people up during the night and this doesn't. If I had to say one thing I do wish it had; a carrying case. I can't store it in the box it came in because the box was beat up, but I would like to have a carrying case to store it to keep it protected when not in use. I'll come up with something in time, but that would have been nice to have. Overall, I will definitely bring this camping or pull it out when 2 beds are not enough for visitors at home. It's also tall, so if it were to deflate a little at night (which it didn't), you won't be on the ground come morning. I would be pleased if I was staying the night and this was on my only option for sleeping.
4 guests found this review helpful. Did you?

[This review was collected as part of a promotion.] I love my new Bikahom Bi-Comfer 14 Inch Inflatable Mattress with Built In Air Pump! It’s so easy to inflate, only takes minutes. It’s great to use for guests staying over or to pack for vacation. It’s also very easy to deflate and packs up very easy. The mattress is so comfortable, it feels like I’m sleeping on my regular bed. This is the best air mattress I have ever used before!
4 guests found this review helpful. Did you?