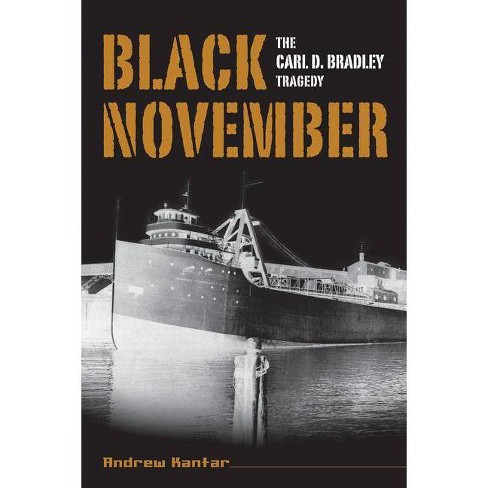 Michigan s "storms of November" are famous in song, lore, and legend and have taken a tragic toll, breaking the hulls of many ships and sending them to cold, dark, and silent graves on the bottoms of the Great Lakes. On November 18, 1958, when the limestone carrier "Carl D. Bradley" broke up during a raging storm on Lake Michigan, it became the largest ship in Great Lakes' history to vanish beneath storm-tossed waves. Along with the "Bradley," thirty-three crew members perished. Most of the casualties hailed from the little harbor town of Rogers City, Michigan, a community that was stung with grief when, in an instant, twenty-three women became widows and fifty- three children were left fatherless. Nevertheless, this is also a story of survival, as it recounts the tale of two of the ship s crew, whose fifteen-hour ordeal on a life raft, in gale-force winds and 25 foot waves, is a remarkable story of endurance and tenacity.
Written in a style that is equally appealing to young adults and adult readers, "Black November" is a tale of adventure, courage, heroism, and tragedy. Kantar, the author of "29 Missing," a book about the loss of the great lakes freighter the Edmund Fitzgerald, has once again crafted a dramatic narrative that is both informative and compelling. Although the "Carl D. Bradley" has been called "the ship that time forgot," "Black November" recalls that tragic day nearly fifty years ago and is a moving tribute to the ship and its crew."