Black & White & Weird All Over - by Jon Bermuda Schwartz (Hardcover) 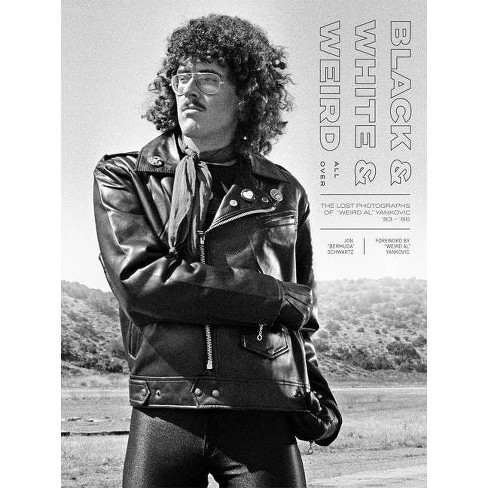 "Black & White & Weird All Over presents hundreds of images of Al, culled from Jon's personal collection of black-and-white photography. These photos only existed on contact sheets - out of mind and out of sight - until now! From behind-the-scenes shots taken on the sets of Al's iconic videos for "Ricky," "I Love Rocky Road," "Eat It," and "Living With A Hernia," to studio sessions for Al's IN 3-D and Polka Party! LPs, Black & White & Weird All Over is the ultimate photographic essay of Weird Al's undisputed comedic genius"--Amazon.com.

Weird Al Yankovic is one of music's most beloved figures. A skilled accordion player and songwriter, the California native is known for his meticulous parodies of popular songs, hilarious originals, and, of course, for upbeat polkas!

For much of Al's career, one man has been by his side, photographing and documenting the fun and weirdness: longtime drummer Jon Bermuda Schwartz. Since meeting Al in 1980, Jon has taken more than 20,000 images of Al in his element: on tour, in the studio, and on video sets.

Black & White & Weird All Over presents hundreds of images of Al, culled from Jon's personal collection of black-and-white photography. These photos only existed on contact sheets - out of mind and out of sight - until now! From behind-the-scenes shots taken on the sets of Al's iconic videos for Ricky, I Love Rocky Road, Eat It, and Living With A Hernia, to studio sessions for Al's IN 3-D and Polka Party! LPs, Black & White & Weird All Over is the ultimate photographic essay of Weird Al's undisputed comedic genius.

Lovingly printed, often full-page scenes that are woozily kinetic, arrestingly intimate and cinematic in their framing. The book is, indeed, black and white all over, from the crisp, glossy images to the sharp, museum-gift-shop design. The not-so-surprising twist in the gorgeous coffee-table book is that there was more artistry there than we were lead to believe. The truth is, [Al's] self-effacing persona conceals one of the late 20th and early 21st century's greatest bodies of cultural critique - even if it's in comedy-song form.--The Denver Post

'Weird Al' Yankovic has never been out of fashion, but the new coffee table tome Black & White & Weird All Over preserves the beloved singer/songwriter's vintage '80s lewks. Spanning 1983 to 1986 -- after Dr. Demento and before UHF -- these rare photos come directly from the archive of Jon 'Bermuda' Schwartz, Yankovic's drummer and personal shutterbug. Schwartz snapped away while his pal filmed the classic videos for 'Ricky' and 'I Love Rocky Road, ' and mixed his accordion-heavy 1986 album, Polka Party!, providing an up-close-and-personal perspective as Weird Al's star went supernova.--Yahoo!'s It List (Best in Pop Culture / Week of Nov 16, 2020)

The satirical singer/songwriter 'Weird Al' Yankovic and his entourage goof up a storm in this album of behind-the-scenes photographs. The sense of exuberant creativity and fun that comes through in these photos will appeal to Yankovic's many fans.--Kirkus Reviews

One of the 10 best music books of the year! --Exclaim!

"The last several decades have been an amazing ride. More than once--an annoying number of times, actually--Jon has warned me, 'Someday I'm going to write a book about all this!' It became a bit of a running joke. But now he's actually made good on the threat. It's a fine snapshot--actually, several hundred snapshots--of what life was like for us in the '80s.--Weird Al Yankovic

"I was excited to get the book because I still shoot black-and-white film myself, and carry my camera on my shoulder on every movie I make, documenting the whole process. These shots are terrific and look great in the book!"--Rian Johnson, Director/Writer, Knives Out & Star Wars: The Last Jedi

Weird Al's drummer takes you into the studio, backstage, and offstage for the making of a superstar. Hey, I was there too--but Bermuda brought his camera!--Dr. Demento

Gorgeous. Black & White & Weird All Over is well worth the admission price, and it has instantly become one of my most treasured art books to arrive in recent years.--Movieweb

True to its name, this book features an almost entirely unseen trove of monochromatic photos taken by Schwartz - all capturing Al, his band and collaborators in the studio, on the road and in production of some of the funniest videos of MTV's golden age.--The Second Disc

Black & White & Weird All Over documents Yankovic's rise in comedy fame since the 1980s, capturing all the effort and fun behind his Grammy-winning music.--The Plain Dealer

An insider's look at 'Weird Al' Yankovic history. While the book chronicles the behind-the-scenes moments of events like the video shoots for 'Ricky, ' 'I Love Rocky Road' and 'Eat It, ' as well as studio time during the making of the 1984 smash hit In 3-D, it also largely shows Yankovic in his natural element, from a different perspective.--Vanyaland

Black & White & Weird All Over finds the quiet humanity and vulnerability behind all the zaniness. A fascinating, revelatory coffee table book.--Nathan Rabin, Author, Weird Al: The Book & The Weird Accordian to Al

A beautiful, personal book that will have fans flipping.--The Laugh Button

JON "BERMUDA" SCHWARTZ has been the drummer with "Weird Al" Yankovic since 1980 and is seen and heard on all of Weird Al's albums, videos, and concert and television performances. He is also the group's archivist, with an unmatched collection of memorabilia, audio & video releases from around the world, and photos.

"WEIRD AL" YANKOVIC is an American musician, comedian and actor who is known for his music parodies and original songs that make light of popular culture. He has sold more than 12 million albums, performed more than 1,700 live shows, and earned five Grammy Awards. His last LP, Mandatory Fun, debuted at #1 on the Billboard 200, the first comedy album ever to do so.

X-Men: The Art and Making of the Animated Series - by Eric Lewald & Julia Lewald (Hardcover)

Play The Pathway to Language - by Sue Schwartz (Paperback)