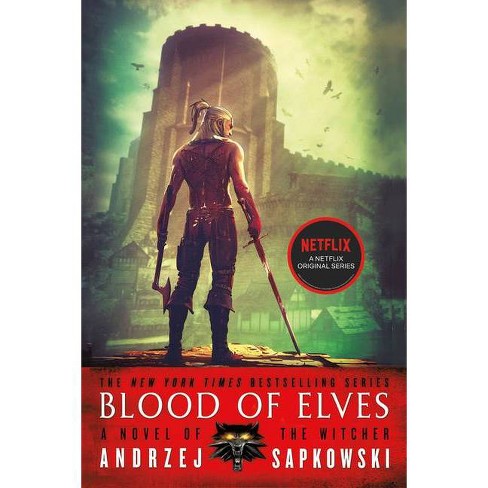 "Originally published in hardcover by Gollancz in Great Britain in 2008"--Title page verso.

The Witcher, Geralt of Rivia, becomes the guardian of Ciri, surviving heiress of a bloody revolution and prophesied savior of the world, in the first novel of Andrzej Sapkowski's New York Times bestselling series that inspired the hit Netflix show and the blockbuster video games.

For over a century, humans, dwarves, gnomes, and elves have lived together in relative peace. But times have changed, the uneasy peace is over, and now the races are fighting once again. The only good elf, it seems, is a dead elf.

Geralt of Rivia, the cunning assassin known as the Witcher, has been waiting for the birth of a prophesied child. This child has the power to change the world--for good, or for evil.

As the threat of war hangs over the land and the child is hunted for her extraordinary powers, it will become Geralt's responsibility to protect them all. And the Witcher never accepts defeat.

Look out for The Tower of Fools, book one of Andrzej Sapkowski's Hussite Trilogy, available now!

Hussite Trilogy
The Tower of Fools

The Malady and Other Stories: An Andrzej Sapkowski Sampler (e-only)

"The universe of Sapkowski's The Witcher is one of the most detailed and best-explored in modern fantasy, offering endless opportunities for fresh ideas ... Complex character relationships enrich this already complex world; this is the sort of series fantasy fans will cherish."--B&N

"The Lady of the Lake is, without any doubt, the best and most profound fantasy novel I have ever read. It is hard to put down, yet also a challenging and deeply rewarding book. And it is genuinely moving. I have never read a fantasy series like this, and suspect I never will again."--Nerds of a Feather on The Lady of the Lake

"The Witcher delivers one of the most intense and rewarding role-playing experiences this year."--GT Reviews on The Witcher video game

"I really, really enjoyed this book ... None of the characters in Sapkowski's world are black or white; they are all shades of grey, including Geralt and the monsters."--The Deckled Edge

"It is [his] world-weariness combined with his battle-honed powers that make Geralt such an interesting character. Here's hoping The Last Wish is merely the opening chapter in his English language adventures."--Edge

"Like a complicated magic spell, a Sapkowski novel is a hodgepodge of fantasy, intellectual discourse, and dry humor. Recommended."--Time

"Like Mieville and Gaiman, [Sapkowski] takes the old and makes it new ... fresh take on genre fantasy."--Foundation on The Last Wish

"New battle mechanics, a fantastic storyline, and a gritty setting make The Witcher one of the most engrossing, mature RPGs to arrive on the PC in years."--Gamespot.com on The Witcher video game

"One of the best and most interesting fantasy series I've ever read. Though it functions well as adventure fiction, it has added depth and value as satire and commentary on fantasy literature ... Sapkowski is a genuine stylist."--Nerds of a Feather

"Sapkowski has a phenomenal gift for narrative, inventing sensational events, creating a suggestive mood, and building up the suspense along with a dazzling, slightly cynical sense of humor."--Jacek Sieradzki, Polityka on The Last Wish

"Sapkowski is very good at creating interesting, imaginative characters with unusual levels of depth to them ... The Last Wish is an enjoyable book full of stories both melancholy and comic."--The Wertzone

"Sapkowski's The Last Wish is a great collection of short stories centered around a witcher, Geralt - a rare sorcerous breed who hunts down the monstrous but is feared by the innocent. With a wondrous mix of Eastern European folklore and myth, beautiful princesses, mischievous demons and where all is not as it seems, The Last Wish is a great read - perfect for dipping into or just reading cover to cover, as I did."--Waterstones

Andrzej Sapkowski was born in 1948 in Poland. He studied economy and business, but the success of his fantasy cycle about the sorcerer Geralt of Rivia turned him into a bestselling writer. He is now one of Poland's most famous and successful authors.
If the item details above aren’t accurate or complete, we want to know about it. Report incorrect product info.