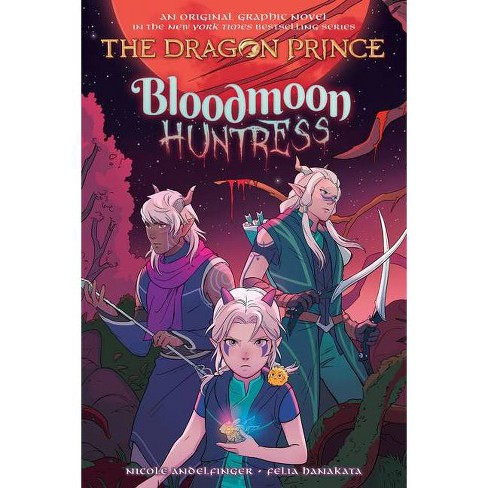 Don't miss this original canon story set in the world of the Emmy Award-winning Netflix animated series The Dragon Prince, with story by the creators of the series and of the New York Times bestselling Through the Moon (The Dragon Prince Graphic Novel #1).

Every Moonshadow elf child knows the scary stories of the Bloodmoon Huntress, the evil sorceress who steals your blood on the night of the Harvest Moon. Everyone also knows those legends aren't true.

But for young Rayla, whose parents recently left her behind to fulfill their duty as members of the elite Dragonguard, this autumn is scarier than most. Her guardians, Runaan and Ethari, are still getting the hang of the whole parenting thing, and no one will tell Rayla what Runaan does for a living. She spends most of her time exploring the forest outside the Silvergrove.

When Rayla discovers a young Skywing elf in danger just hours before the Harvest Moon will rise, the scary stories become real. Can she stop the Huntress before the moon reaches its zenith?

Praise for Through the Moon (The Dragon Prince Graphic Novel #1):

Wartman's scripting really excels is in the dialogue, capturing both the raw, unresolved emotions from Callum and Rayla and the animated series' underlying sense of humor. Bouma's art soars both in bringing the characters' emotions to visual life and the more magical elements of the story. -- CBR.com

Praise for The Dragon Prince on Netflix:

The Dragon Prince offers viewers a rich and suggestive world that's teeming with possibilities about what might be happening beyond the frame. -- The Verge

The Dragon Prince Is a Fantasy Knockout. -- Phoenix New Times

Nicole Andelfinger was crafting stories as far back as when coloring in the squiggles on your composition book was considered cool. Since then, she's only continued to dwell in the realms of magic, monsters, and myth. When not changing her hair color or writing comics for some of her favorite characters, she works a day job best described as 'emails'. She lives with her absolutely, most decidedly perfect cat in Los Angeles.
Felia Hanakata is an Indonesia-based illustrator. She believes story-telling breathes life and colors into the world. When she is not drawing, she reads, drinks lots of coffee, plays video games, and looks for inspiration in nature and her surroundings. Her illutsration clients include Simon & Schuster, Audible/Highlights Magazine, DC Comics, Cottage Door Press, and many more. You can find her online at feliahanakata.com.
If the item details above aren’t accurate or complete, we want to know about it. Report incorrect product info.