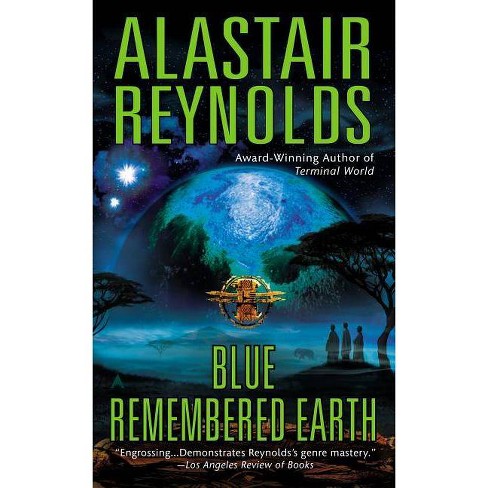 $7.69
MSRP$8.99
no reviews yet
be the first!be the first! ratings
Shipping
Free standard shipping with RedCard
Help us improve this page

Praise for Blue Remembered Earth "Engrossing...Blue Remembered Earth is, ultimately, a collection of conflicting 'isms' individualism, collectivism, romanticism, capitalism, expansionism, escapism. The ability to integrate such competing notions into a stable narrative speaks to the ideological power of the best SF; it also demonstrates Reynolds's genre mastery....More importantly, the projected series--and the work Reynolds has yet to produce--will tell us much about the state of SF in the early twenty-first century."--Los Angeles Review of Books "Reynolds both develops a richly detailed portrait of a resurgent, postapocalyptic Earth society and economy, and leaves himself plenty of room to expand his narrative space exponentially."--Locus "As my number one SF writer of the '00s, any novel or story by Alastair Reynolds is a must...A compulsive read that you do not want to put down...If you want to understand why SF at its best is still the most interesting form of literature today, Blue Remembered Earth [is the place] to go."--Fantasy Book Critic "Reynolds's near-future is so brilliantly extrapolated, with original ideas fizzing off every page, that the reader is left awestruck at what further wonders await in the following volumes. Excellent."--The Guardian (UK) "A richly detailed portrait of a resurgent, postapocalyptic Earth society and economy."--Locus "Reynolds does what he does best in this tale of a not-unimaginably distant future: a sweeping family epic. With space travel."--Booklist
If the item details above aren’t accurate or complete, we want to know about it. Report incorrect product info.