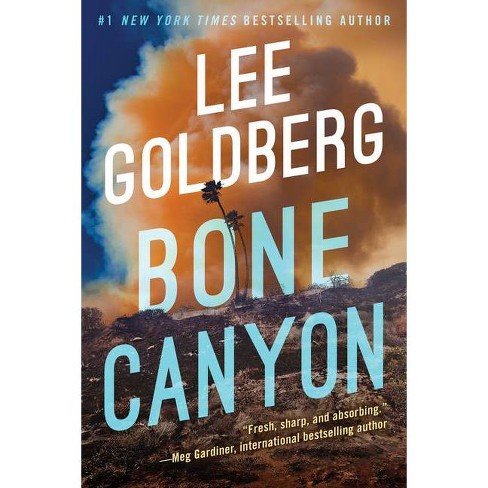 A cold case heats up, revealing a deadly conspiracy in a twisty thriller by #1 New York Times-bestselling author Goldberg. A catastrophic wildfire scorches the Santa Monica Mountains, exposing the charred remains of a woman who disappeared years ago. The investigation is assigned to Eve Ronin, the youngest homicide detective in the Los Angeles County Sheriff's Department.

A catastrophic wildfire scorches the Santa Monica Mountains, exposing the charred remains of a woman who disappeared years ago. The investigation is assigned to Eve Ronin, the youngest homicide detective in the Los Angeles County Sheriff's Department, a position that forces her to prove herself again and again. This time, though, she has much more to prove.

Bones don't lie, and these have a horrific story to tell. Eve tirelessly digs into the past, unearthing dark secrets that reveal nothing about the case is as it seems. With almost no one she can trust, her relentless pursuit of justice for the forgotten dead could put Eve's own life in peril.

A Mystery & Suspense Magazine 2021 Best Book of the Year Selection

"Lee Goldberg proves again that he is a master storyteller with this piece. His ability to develop strong plots and use a fast-paced narrative keeps the reader on their toes as things progress. Poignant characters also help keep things enthralling until the final reveal for the attentive reader." --Mystery & Suspense Magazine

"Goldberg knows how to keep the pages turning." --Publishers Weekly

"Goldberg's pacing and plotting are both pitch perfect, and his command of the story places him at the top of modern-day California crime writers staking a claim to the mantle of Raymond Chandler and Dashiel Hammett. Bone Canyon is destined to be the first great mystery of 2021." --Providence Journal

"Thought-provoking, compelling, and unafraid to tackle the tough subject of sexual violence, Bone Canyon is a terrific read that doesn't let up the pace until the final page. Goldberg has created a powerful character in Eve Ronin, a talented and dedicated woman in a tough job." --Authorlink

"Goldberg is clearly a fantastic storyteller...he has written or produced dozens of excellent television shows like The Glades, Psych, and Monk...readers that believe they do not like police procedurals, the Eve Ronin series could definitely be the exception to that." --The Nerd Daily

"Wow--what a novel! It is wonderful in so many ways. I could not put it down. Bone Canyon is wrenching and harrowing, full of wicked twists. Lee Goldberg captures the magic and danger of the Santa Monica Mountains and the predators who prowl them. Detective Eve Ronin takes on forgotten victims, fights for them, and nearly loses everything in the process. She's a riveting character, and I can't wait for her next case." --Luanne Rice, New York Times bestselling author

"Bone Canyon is a propulsive procedural that provides high thrills in difficult terrain, grappling thoughtfully with sexual violence and police corruption, as well as the minefield of politics and media in Hollywood and suburban Los Angeles. Eve Ronin is a fantastic series lead--stubborn and driven, working twice as hard as her colleagues both to prove her worth and to deliver justice for the dead." --Steph Cha, author of Your House Will Pay

"Goldberg, who must write while he sleeps to have so many books and movie scripts, has created a compelling hero whose dedication to justice is constantly being misinterpreted as limelight stealing, and paired her with a please-don't-let-me-die-on-a-case-before-I-retire mentor/partner who is often more concerned with what's the next meal. A lot of thrills and a little humor are added to the mix, resulting in a thoroughly enjoyable police procedural." --Daniel Goldin, Boswell Book Company

"An energetic, resourceful procedural starring a heroine who deserves a series of her own." --Kirkus Reviews

"This nimble, sure-footed series launch from bestseller Goldberg...builds to a thrilling, visually striking climax. Readers will cheer Ronin every step of the way." --Publishers Weekly

"A cop novel so good it makes much of the old guard read like they're going through the motions until they can retire...The real appeal here is Goldberg's lean prose, which imbues just-the-facts procedure with remarkable tension and cranks up to a stunning description of a fire that was like 'Christmas in hell.'" --Booklist

"[The] suspense and drama are guaranteed to keep a reader spellbound..." --Authorlink

"This sterling thriller is carved straight out of the world of Harlan Coben and Lisa Gardner...Lost Hills is a book to be found and savored." --BookTrib

"Lost Hills is Lee Goldberg at his best. Inspired by the real-world grit and glitz of LA County crime, this book takes no prisoners. And neither does Eve Ronin. Take a ride with her and you'll find yourself with a heroine for the ages. And you'll be left hoping for more." --Michael Connelly, #1 New York Times bestselling author

"Lost Hills is what you get when you polish the police procedural to a shine: a gripping premise, a great twist, fresh spins and knowing winks to the genre conventions, and all the smart, snappy ease of an expert at work." --Tana French, New York Times bestselling author

"Thrills and chills! Lost Hills is the perfect combination of action and suspense, not to mention Eve Ronin is one of the best new female characters in ages. You will race through the pages!" --Lisa Gardner, #1 New York Times bestselling author

"A winner. Packed with procedure, forensics, vivid descriptions, and the right amount of humor. Fervent fans of Connelly and Crais, this is your next read." --Kendra Elliot, Wall Street Journal and Amazon Charts bestselling author

"A winner from first page to last. Lee Goldberg has single-handedly invented a new genre of thriller. At once nail-bitingly suspenseful and gut-bustingly hilarious...but never less than a pedal-to-the-metal, full-on page-turner. Fake Truth is clever, edge-of-your-seat entertainment that I read in one glorious sitting. And that's no lie!" --Christopher Reich, New York Times bestselling author

"A delight from start to finish, a round-the-world, thrill-a-minute, laser-guided missile of a book." --Joseph Finder, New York Times bestselling author of Judgment

"Killer Thriller is an action-packed treasure filled with intrigue, engaging characters, and exciting, well-rendered locales. With Goldberg's hyper-clever plotting, dialogue, and wit on every page, readers are in for a blast with this one!" --Mark Greaney, New York Times bestselling author of the Gray Man series

"Thriller fiction at its absolute finest--and it could happen for real. But not to me, I hope." --Lee Child, #1 New York Times bestselling author of the Jack Reacher series

"This may be the most fun you'll ever have reading a thriller. It's a breathtaking rush of suspense, intrigue, and laughter that only Lee Goldberg could pull off. I loved it." --Janet Evanovich, #1 New York Times bestselling author

"This is my life...in a thriller! True Fiction is great fun." --Brad Meltzer, #1 New York Times bestselling author of House of Secrets

"Fans of parodic thrillers will enjoy the exhilarating ride...[in] this Elmore Leonard mashed with Get Smart romp." --Publishers Weekly

"A conspiracy thriller of the first order, a magical blend of fact and it-could-happen scary fiction. Nail-biting, page-turning, and laced with Goldberg's wry humor, True Fiction is a true delight, reminiscent of Six Days of the Condor and the best of Hitchcock's innocent-man-in-peril films." --Paul Levine, bestselling author of Bum Rap

"Great fun that moves as fast as a jet. Goldberg walks a tightrope between suspense and humor and never slips." --Linwood Barclay, New York Times bestselling author of The Twenty-Three