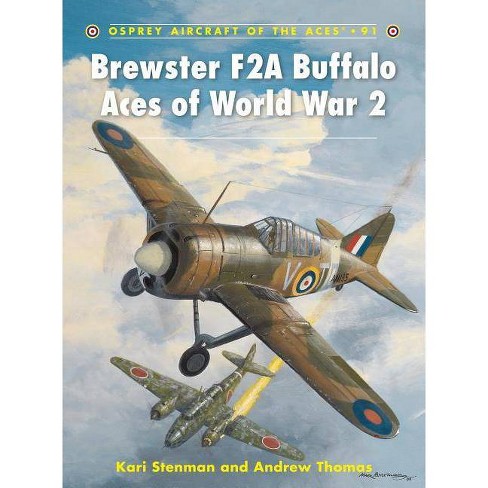 $17.89
MSRP$22.95
no reviews yet
be the first!be the first! ratings
Shipping
Free standard shipping with RedCard
Loading, please wait...
Help us improve this page

"This book is a must-have for the aviation historian and military analyst to understand how this much-overlooked aircraft impacted aerial combat during World War 2. Modelers will also enjoy the history, photography and color profiles to replicate the mounts of these aces. This title is recommended!" --Michael Benolkin, Cyber Modeler, cybermodeler.com (February 2010)

"This book covers it all, starting with its use by Finland during WW2, then moving on to Malaya, Burma and its final US use at Midway. Included in this are super period photos of the men and planes as well as the expected center section of full color profiles by Chris Davey and a couple of color photographs. There is also the usual table of pilots of various nations that achieved ace or near ace status flying the aircraft. In all, it makes for a great read and a super reference book. It is one that I have no trouble highly recommending to you." --Scott Van Aken, Modeling Madness, modelingmadness.com (February 2010)

"Kari Stenman and Andrew Thomas' BREWSTER F2A BUFFALO ACES OF WORLD WAR 2 joins others in Osprey's 'Aircraft of the Aces' series I offering a comprehensive survey of the pilots and missions of the F2A aircraft ... Military libraries strong in equipment history will find this a welcome addition." --The Midwest Book Review (April 2010)

"I found this book to be very interesting, and very comprehensive. As an example, in the Far East chapters, the authors were able to correlate Allied kills with Japanese pilots shot down. In addition, the pilot recounts of their actions were highly regarded, as we are close to having lost most those people to age related demise, so to work those into the 'story' of the Brewster was greatly appreciated." --Kevin Iutzeler, IPMS (March 2010)