Bridges - by David B Ostler (Hardcover) 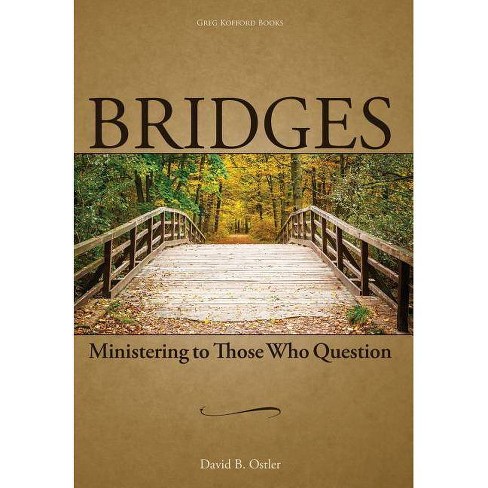 "Even in a culture of the religiously disaffected, the toll on Latter-day Saint faithful is alarming. David Ostler's book does not aim to stem the tide, but to lessen the pain of those on both sides of the faith divide. It is a deeply Christian book that calls upon us all to seek understanding and minister to the wounded." --Terryl Givens, co-author of The Crucible of Doubt: Reflections on the Quest for Faith

"David Ostler's Bridges: Ministering to Those Who Question is one of the most important books I have read in the past decade. Unlike other good books written primarily to those experiencing a crisis of faith, Bridges is written to those who have been called as leaders, fellow saints, and family members to minister to those who once were included in our circle of fellowship and love but who no longer are. It should be required reading for every general and local authority of the Church and every Latter-day Saint parent or other adult who interfaces with those experiencing what is called the 'Mormon faith crisis.'" --Robert A. Rees, Co-founder and Vice-President, Bountiful Children's Foundation

"All denominations struggle to keep younger generations engaged, but the Latter-day Saint tradition is particularly challenged by the 'faith crisis' that occurs when Church members are suddenly confronted with inconvenient truths about its history and doctrine. While other authors have described the phenomenon generally, David Ostler gives us unprecedented access to one of its core elements: the disconnect between what members in crisis are experiencing and how Church leaders are responding. Using data from his own surveys, he not only identifies the dimensions of the disconnect but also gives sensible and helpful suggestions for bridging it. Brutally candid at times, it is nonetheless lovingly written in an attempt to stem the outflow of Church members." --Gregory A. Prince, author of David O. McKay and the Rise of Modern Mormonism and Gay Rights and the Mormon Church: Intended Actions, Unintended Consequences