Burn It All Down - by Nicolas Didomizio (Hardcover) 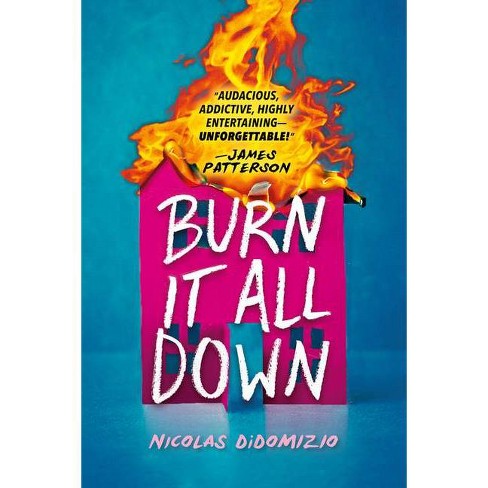 Take the ride of a lifetime with this mother/son buddy comedy James Patterson praises as "audacious, addictive, highly entertaining."
​
Eighteen-year-old aspiring comic Joey Rossi just found out his boyfriend has been cheating on him for the past ten months. But what did he expect? Joey was born with an addiction to toxic jerks--something he inherited from his lovably messy, wisecracking, Italian-American spitfire of a mom (and best friend): 34-year-old Gia Rossi. When Gia's latest non-relationship goes up in flames only a day later, the pair's Bayonne, New Jersey apartment can barely contain their rage. In a misguided attempt at revenge, Joey and Gia inadvertently commit a series of crimes and flee the state, running to the only good man either of them has ever known--Gia's ex, Marco. As they hide out from the law at Marco's secluded lake house, Joey and Gia must confront all the bad habits and mistakes they've made that have led them to this moment--and find a way to take responsibility for what they've done.

"Side-splitting, soul-searching...out-of-control but utterly human, these 'felons without a plan' face their demons in their own inimitable style."--Shelf Awareness (starred review)

"Hell hath no fury like a mother AND son scorned. Except in Nicolas DiDomizio's capable hands, fiery anger is the spark for forgiveness, growth, self-acceptance, and deep connection. A fast, fun, and unforgettable debut."

--Steven Rowley, bestselling author of Lily and the Octopus and The Guncle

"There's nobody I'd rather drink wine and commit arson with than Joey and Gia Rossi. Riotously funny and packed with heart, this novel is endearingly messy and beyond entertaining."

"Don't try to drink any beverages while reading this laugh-out-loud novel about a mother and son duo who try to exact revenge on their lovers with disastrous results. It's super voicey, entirely too much fun, and full of love."--Good Housekeeping

"This hilarious revenge-filled romp may seem like nothing but fluffy fun at the start, but, on a deeper dive, it's a thoughtful examination of relationships and inherited trauma that will appeal to a wide range of readers."--Booklist

Nicolas DiDomizio holds a bachelor's degree from Western Connecticut State University and a master's degree from NYU. Prior to his career in fiction, he wrote for the internet for several years while also working in corporate roles at Condé Nast, MTV, and more. He lives in upstate New York with his partner Graig and their adorably grumpy bulldog, Tank. Burn It All Down is his debut novel. Follow him on Twitter at @ctnicolas and Instagram at @nicdidomiziobooks.
If the item details above aren’t accurate or complete, we want to know about it. Report incorrect product info.