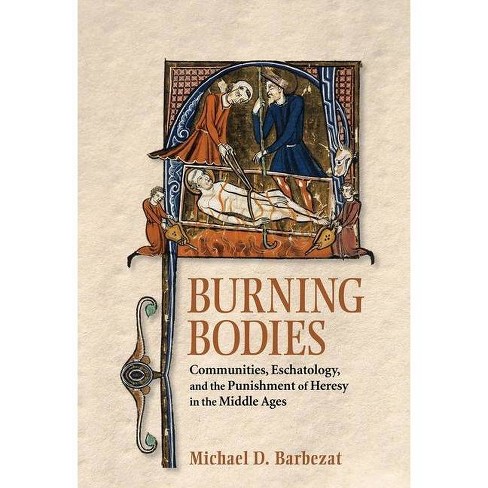 $55.00
undefined out of 5 stars with 0 reviews
be the first!be the first! ratings
Help us improve this page

Burning Bodies interrogates the ideas that the authors of historical and theological texts in the medieval West associated with the burning alive of Christian heretics. Michael Barbezat traces these instances from the eleventh century until the advent of the internal crusades of the thirteenth century, depicting the exclusionary fires of hell and judicial execution, the purifying fire of post-mortem purgation, and the unifying fire of God's love that medieval authors used to describe processes of social inclusion and exclusion.

Burning Bodies analyses how the accounts of burning heretics alive referenced, affirmed, and elaborated upon wider discourses of community and eschatology. Descriptions of burning supposed heretics alive were profoundly related to ideas of a redemptive Christian community based upon a divine, unifying love, and medieval understandings of what these burnings could have meant to contemporaries cannot be fully appreciated outside of this discourse of communal love. For them, human communities were bodies on fire. Medieval theologians and academics often described the corporate identity of the Christian world as a body joined together by the love of God. This love was like a fire, melting individuals together into one whole. Those who did not spiritually burn with God's love were destined to burn literally in the fires of Hell or Purgatory, and the fires of execution were often described as an earthly extension of these fires. Through this analysis, Barbezat demonstrates how presentations of heresy, and to some extent actual responses to perceived heretics, were shaped by long-standing images of biblical commentary and exegesis. He finds that this imagery is more than a literary curiosity; it is, in fact, a formative historical agent.