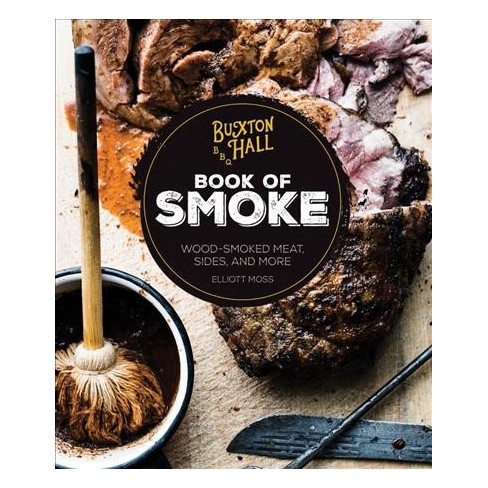 Named by Southern Living in the top 10 of The South's Best BBQ Joints in 2020! In Buxton Hall Barbecue's Book of Smoke, believers in slow-smoked, old-fashioned barbecue will learn how to build and master their own pit, right at home. Start small with chicken or pit beef and work your way up to a whole hog. If you're not yet ready for the pit or limited on space, Moss also teaches easy, economical ways to infuse wood-smoke into your food. Therecipes include all of the Buxton Hall favorites, including:

You will also get whole hog, zero-waste recipes with tastes including:

And will finish the meal with Buxton's take on classic southern desserts like:

Buxton Hall Barbecue's Book of Smoke respectfully and thoughtfully approaches smoke as an ingredient, and hardwood coals as a magically shapeable source of heat. [Moss's] focus on vegetable cookery and its relationship to coals and meat shines as brightly as his glistening and cherished whole hog. There's something for everyone to learn from in these pages, and my favorite takeaway may be the sense of community that Elliott and Team Buxton put into all of their endeavors, from the wild ride of opening and running a restaurant to the age-old practice of barbecue.

Elliot's passion for food is equal to his passion for people. His attention to detail shows in every dish that comes out of his kitchen. He's a genuine, salt-of-the-earth guy who I feel privileged to call a friend.

Elliott's grandparents must be proud. Raised on chicken bog and whole-hog barbecue, the self-taught chef has carried that torch into the twenty-first century with a menu of wood-cooked meats and vegetable sides that taste like full-color updates to faded Southern classics. Now, he's bringing his cooking back home. These recipes are timeless. Read and learn.

It's great to see Elliott get back to his roots . . . [he] does such a great job using the whole hog to make creative, delicious barbecue.

Moss, the chef at Asheville, N.C.'s Buxton Hall Barbecue, shares his considerable knowledge on the craft of Carolina pit smoking, known for its delicate flavors and the use of freshly charcoaled wood rather than live fire.. .(the book) employs some 150 color photos to make sure that smoke gets in your eyes in pleasing ways, with close-ups of nearly all the eats.

Rife with authenticity and a genuine care for community, this book is an honest and open account of Moss's journey to opening Buxton Hall, filled with recipes that will soon be traditions in your own kitchen.

The fire that burns in Elliott is contagious. He is my brother, my mentor, and a constant inspiration. The work it takes to get where he is now breaks most people, and Elliott is thriving. This book is pure love.

The hallowed tradition of BBQ is in a world of turmoil, but chefs like Elliott Moss, combining a respect for history with an innovative approach to flavor, will carry on this precious torch for the next generation. The BBQ hash alone is worth the drive to Asheville, no matter where you live.

There is no substitute for the dedication and passion that Elliott pours into his smokers, which pump out some of the most creative and distinctive barbecue and side dishes available anywhere in the country. The fact that he is willing to share his techniques, secrets, and philosophy with the readers of this book is just the topping on the banana pudding pie. Mmmm . . . that pie!

--Chris Chamberlain, food, drink, and travel writer and author of The Southern Foodie's Guide to the Pig

"Much of the book is a whip-smart, handsome-looking primer on the thing that's earned Buxton Hall so much acclaim since it opened just a year ago in Asheville: meat, cooked low and slow over coals. This book is your one-stop guide for hosting an epic pig picking: building the pit, smoking the hog, making the sides, and afterward finishing off your pork-wobbled guests with a killer dessert." --Garden & Gun

Elliott Moss has received national attention for his innovative cooking from the New York Times, Food & Wine, Martha Stewart Living, Southern Living, Bon Appetit, Garden & Gun, GQ, and other publications. He was nominated for a James Beard Award for Best Chef Southeast in 2013. He currently resides in Asheville, North Carolina, where he has been the head chef at celebrated restaurant The Admiral and pop-up restaurants such as Punk Wok and The Thunderbird. He is now the co-owner and head chef of Buxton Hall Barbecue.