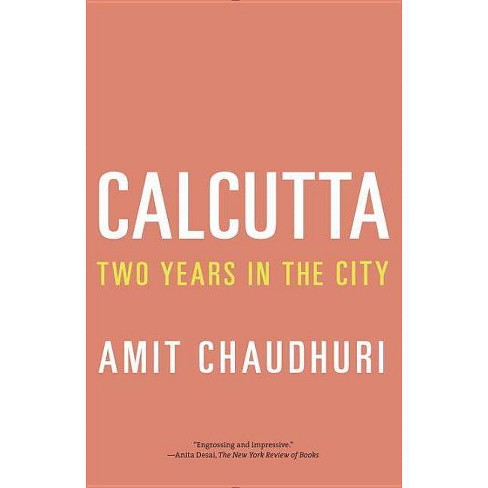 $16.99
no reviews yet
be the first!be the first! ratings
Shipping
Not available
Help us improve this page

"Fascinating. . . . Chaudhuri explores ideas of modernity and globalization in this essayistic appreciation. . . . [His] insider-outsider status allows him to probe the city's eccentricities with both affection and unease." --The New Yorker

"[A] lovely account. . . . [Marked by] the strength of Mr. Chaudhuri's prose and the acuity of his observations. . . . [His] very personal story is a welcome contribution to the literature of the city. It also recalls another author who first set foot in Calcutta in 1962: V.S. Naipaul." --The Wall Street Journal

"Equal parts memoir, literary history, sad-eyed sitcom. . . . [Calcutta is] rich in presence and sings a beautiful tune all of its own. . . . All the richer for presenting the city as a series of unexpected memory tugs." --The Guardian (London) "Chaudhuri's writing has a strangely mesmeric quality, using the quotidian to draw the reader into the author's mental world, his own way of looking. . . . His prose displays an ability amounting to brilliance for finding the right words to catch an emotion, a thought, a personality." --Financial Times

"Simply stunning. . . . Calcutta should be mandatory reading not only for those unfamiliar with the place but for those who imagine they know it well. . . . Blending reportage, meditation, history and critique, it draws a fascinating portrait." --The Independent (London) "A complex patchwork of topics, scenes and even genres. It's a crazy-quilt of a book that shows the author's ear for reproducing speech and his knack for sketching not only personalities but also smells and, especially, tastes." --Pittsburgh Post-Gazette

"India's great cities have been the subject of many outstanding travel books and now it is the turn of Calcutta. [Chaudhuri's] stories are spun out of a mix of history and family memoir, but the joy here lies in his digressions, his wanderings through the city, his remembrances and conjectures." --The Sunday Times (London) "Chaudhuri approaches his chronicle of the city of his birth with a practised eye." --London Review of Books

"A splendid read; an introduction to a city, or confirmation of it; a meditation on expression and on [the author's] own development as a writer. . . . Chaudhuri's prose is delicious, his humour wry." --Australian Book Review

"Beguiling. . . . Chaudhuri makes [Calcutta] sound like just the place to be." --The Spectator (London) "Concussed by the noise of the new and beguiled by echoes of the past, Chaudhuri maintains his novelist's eye and ear for Calcutta's character and citizens. He combines the serendipity of the flï¿½neur with the sensitivity of the social historian." --The Times (London) "Chaudhuri is a writer, academic and musician. He uses his consciousness of all three in his narratives. He's curious, he's edgy . . . he's incisive, reflective and sometimes poetic." --The Tribune (India) "Chaudhuri's Calcutta has a different scope and intention to Suketu Mehta's Maximum City (about Mumbai) and to William Dalrymple's City of Djinns (about Delhi), but like those books, it succeeds brilliantly in making sense of a place few of us can know." --The Observer (England) "Unique and fascinating. . . . [Chaudhuri's] masterful prose style lingers on the tiny, quotidian details and draws out their significance." --Scottish Herald

"[Chaudhuri's] most personal and perambulatory book to date. . . . [Calcutta] is a modernist canvas that mirrors the complexity and diversity of the metropolis itself and is in turn mirrored by Chaudhuri's idiosyncratic style, blending autobiography, literary reportage, and personal essay." --World Literature Today
If the item details above aren’t accurate or complete, we want to know about it. Report incorrect product info.