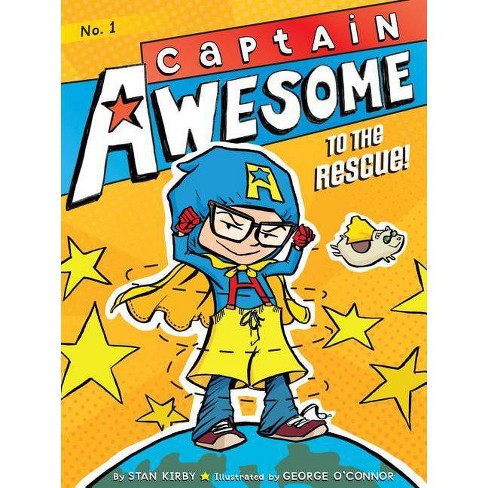 The town of Sunnyview got a little bit safer when 8-year-old Eugene McGillicudy moved in.

Just like his comic-book mentor, Super Dude, Eugene, aka Captain Awesome, is on a one-man mission is to save the world from supervillains, like the nefarious "Queen Stinkypants from Planet Baby." Just as Eugene suspected, plenty of new supervillains await him at Sunnyview Elementary. Are Meredith Mooney and the mind-reading Ms. Beasley secretly working together to try and force Eugene to reveal his secret identity? Will Principal Brick Foot succeed in throwing Captain Awesome into the "Dungeon of Detention?" Fortunately, Eugene isn't forced to go it alone. Charlie Thomas Jones, fellow comic-book lover and Super Dude fan, stands ready and willing to help. When the class hamster goes missing, Captain Awesome must don his cape and, with the help of his new best friend, ride to the rescue. Kirby's funny and engaging third-person narration and O'Connor's hilarious illustrations make the book easily accessible and enormously appealing, particularly to readers who have recently graduated to chapter books. But it is the quirky, mischievous Eugene that really makes this book special. His energy and humor are contagious, and his dogged commitment to his superhero alter ego is enough to make anyone a believer.