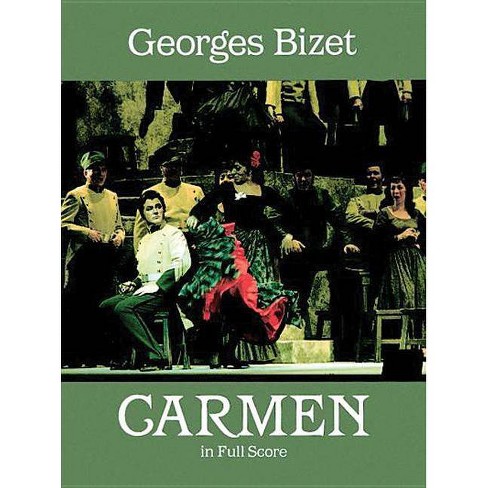 When he first heard Carmen, Tchaikovsky enthusiastically predicted it would become the world's most popular opera. Wagner, too, was an admirer of this dramatic masterpiece, and Brahms claimed to have seen it 29 times. At its premiere in Paris in 1873, however, Carmen did not succeed with the public or the critics. Indeed, it created a scandal. But in time, as Tchaikovsky foresaw, it would become the favorite opera of audiences worldwide. And in over a century Carmen has never relinquished its position as one of the most performed and recorded operas in the repertoire.
Conceived and composed as an opï¿½ra comique (a genre it completely transformed), Carmen was converted after Bizet's tragic early death to grand opera with the addition of recitatives composed by Ernest Guiraud. This superbly produced full-score edition replicates this grand-opera version, the one most commonly produced on operatic stages today.
Accustomed to the light and sentimental subjects and conventions of opï¿½ra comique, Bizet's public and critics were at first horrified by Carmen's lurid plot and characters. Critics pronounced its story, dominated by sexual passion and jealousy, too "obscene" for the stage, called for the mezzo-soprano portraying Carmen to be hauled into court, and disparaged the music as unoriginal and undramatic. Soon, fortunately, this hysteria subsided, further productions were mounted, and the world embraced this towering music drama with its compelling flesh-and-blood characters and the tragic fate their unruly passions make inevitable.
Musicians and music lovers alike will find in this inexpensive yet well-made edition an ideal way to study and savor the unique merits of Carmen, whose central struggle is so movingly expressed and advanced in the rich and dramatic themes and textures of the music itself, not merely in the libretto. With this score in hand, they can enjoy both live and recorded performances of what is perhaps the best-known and most beloved opera in the world.