Cartwheels in a Sari (Reprint) (Paperback) by Jayanti Tamm 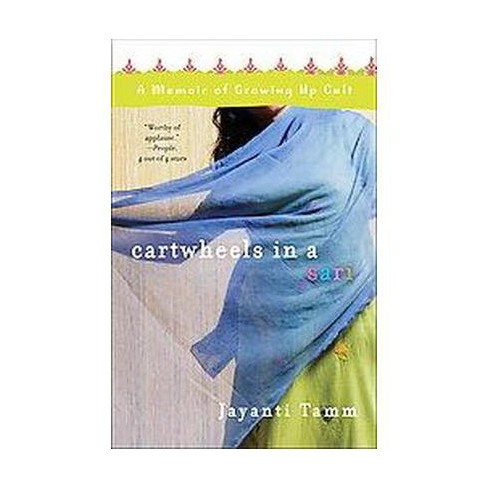 $11.90
5 out of 5 stars with 1 reviews
11 ratings
Shipping
No longer available
See similar items
Help us improve this page

In this colorful, eye-opening memoir, Jayanti Tamm offers an unforgettable glimpse into the hidden world of growing up “cult” in mainstream America. Through Jayanti’s fascinating story–the first book to chronicle Sri Chinmoy–she unmasks a leader who convinces thousands of disciples to follow him, scores of nations to dedicate monuments to him, and throngs of celebrities (Sting, Pope John Paul II, Nelson Mandela) to extol him.

When the short, bald man in flowing robes prophesizes Jayanti to be the “Chosen One,” her life is forever entwined with the charismatic guru Sri Chinmoy, who declares himself a living god. A god who performs sit-ups and push-ups in front of thousands as holy ritual, protects himself with a platoon of bodyguards, and bans books, TV, and sex. Jayanti’s unusual and increasingly bizarre childhood is spent shuttling between the ashram in Queens, New York, and her family’s outpost as “Connecticut missionaries.” On the path to enlightenment decreed by Guru, Jayanti scrubs animal cages in his illegal basement zoo, cheerleads as he weight lifts an elephant in her front yard, and trails him around the world as he pursues celebrities such as Princess Diana and Mother Teresa.

But, when her need for enlightenment is derailed by her need for boys, Jayanti risks losing everything that she has ever known, including the person that she was ordained to be. With tenderness, insight, and humor, Jayanti explores the triumphs and trauma of an insider who longs to be an outsider, her hard-won decision to finally break free, and the unique challenges she confronts as she builds a new life.


From the Hardcover edition.
If the item details above aren’t accurate or complete, we want to know about it. Report incorrect product info.

5 out of 5 stars
sylviamoon - 9 years ago
This book was a fast read with a story that stays with you for weeks. The description of cult life was entertaining and "exotic" but the struggle Jayanti goes through is relatable to everyones life. Highly recomend!
Did you find this review helpful?
Report review