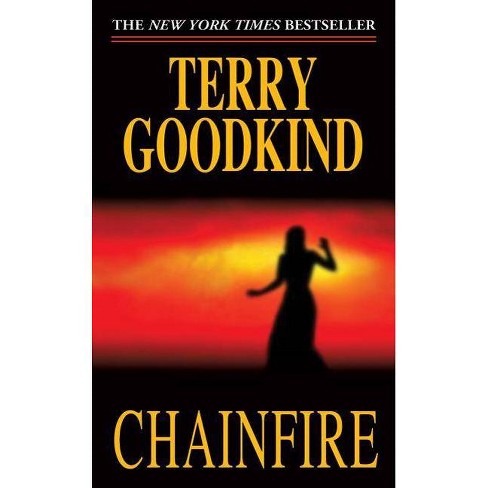 $8.49
MSRP$9.99
undefined out of 5 stars with 0 reviews
be the first!be the first! ratings
Help us improve this page

The author of "Wizard's First Rule" returns with a new novel of Richard and Kahlan, the beginning of a sequence of three novels that will bring The Sword of Truth to its riveting culmination.

With Wizard's First Rule and seven subsequent masterpieces, Terry Goodkind has thrilled readers worldwide with the unique sweep of his storytelling. Now, in Chainfire, Goodkind returns with a new novel of Richard and Kahlan, the beginning of a sequence of three novels that will bring their epic story to its culmination.

After being gravely injured in battle, Richard awakes to discover Kahlan missing. To his disbelief, no one remembers the woman he is frantically trying to find. Worse, no one believes that she really exists, or that he was ever married. Alone as never before, he must find the woman he loves more than life itself....if she is even still alive. If she was ever even real.

"Wonderful." --Kliatt on Stone of Tears "Each volume of the Sword of Truth . . . proves more difficult to review than the last. There are only so many ways of heaping praise on a series that gets better and better." --SFX on Blood of the Fold ". . . outstanding work . . . adrenaline and characters who actually behave like adults. Highly recommended." --San Diego Union Tribune on Temple of the Winds "...thoroughly enjoyable." --VOYA on Soul of the Fire "Mr. Goodkind's compelling prose weaves a magic spell over readers." --Romantic Times on Faith of the Fallen "Near-perfect pacing, well-realized settings, and superior descriptive narrative." --VOYA on The Pillars of Creation "Everything one could ask for in an epic fantasy." --Publishers Weekly on Stone of Tears

Terry Goodkind (1948-2020) is a #1 New York Times bestselling author. His books include the multi-volume epic fantasy Sword of Truth series -- beginning with Wizard's First Rule, the basis for the television show Legend of the Seeker -- and related series Richard and Kahlan and The Nicci Chronicles.

Goodkind was born and raised in Omaha, Nebraska, where he also attended art school. Alongside a career in wildlife art, he was also a cabinetmaker and a violin maker, and did restoration work on rare and exotic artifacts from around the world. In the 1990s he relocated to Nevada, where, when not writing novels, he was a racing-car enthusiast.
If the item details above aren’t accurate or complete, we want to know about it. Report incorrect product info.