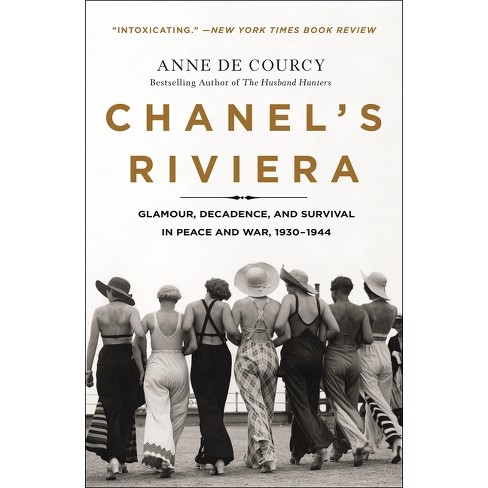 In this captivating narrative, Chanel's Riviera explores the fascinating world of the Cote d'Azur during a period that saw the deepest extremes of luxury and terror in the twentieth century.

The Cote d'Azur in 1938 was a world of wealth, luxury, and extravagance, inhabited by a sparkling cast of characters including the Duke and Duchess of Windsor, Joseph P. Kennedy, Gloria Swanson, Colette, the Mitfords, Picasso, Cecil Beaton, and Somerset Maugham. The elite flocked to the Riviera each year to swim, gamble, and escape from the turbulence plaguing the rest of Europe. At the glittering center of it all was Coco Chanel, whose very presence at her magnificently appointed villa, La Pausa, made it the ultimate place to be. Born an orphan, her beauty and formidable intelligence allured many men, but it was her incredible talent, relentless work ethic, and exquisite taste that made her an icon. But this wildly seductive world was poised on the edge of destruction. In a matter of months, France surrendered to the Germans and the glamour of the pre-war parties and casinos gave way to the horrors of evacuation and the displacement of thousands of families during World War II. From the bitter struggle to survive emerged powerful stories of tragedy, sacrifice, and heroism. Enriched by original research and de Courcy's signature skill, Chanel's Riviera brings the experiences of both rich and poor, protected and persecuted, to vivid life.

Intoxicating descriptions...of Chanel's life, specifically her fashion innovations and love affairs, are woven throughout the book...But glamour on the Riviera would soon give way to a fight for survival. --New York Times Book Review

"A history of the Cote d'Azur, from the frivolity and decadence of its post-Jazz Age heyday to the terror and desperation of World War II." --Wall Street Journal

"De Courcy's book is entertaining...a peek, at once envious and satisfyingly censorious, at the lifestyles of the rich and famous." --The Washington Post "Dishy and well-researched...this fluidly written history succeeds in capturing the era's intoxicating mix of glitz and grit." --Publishers Weekly

"De Courcy deploys gleaming, well-chosen details to make Chanel's Riviera as vivid and entertaining as a novel. Her careful research, coupled with her polished narrative style, illuminates an era of opulence and starvation, of heroes and collaborators, in a world that soared high and swiftly plummeted." --Shelf Awareness "De Courcy is adept at describing displays of opulence, and proves equally capable when portraying the deprivations and reversals of fortune occasioned by the onset of WWII...this will be popular with royal watchers, fashionistas, and readers who relish the international social scene." --Booklist "A gleaming social history of the French Riviera in the 1930s...[a] lovingly researched portrait of paradise." --Kirkus Reviews "Love a bit of real-life sex, disappointment and scandal from some of the 20th century's biggest icons all set against an impossibly luxurious and elegant French backdrop? Then Anne De Courcy's biography of a very select time and place is for you...You'll come away from reading it both better informed and utterly transported." --Stylist, Best Summer Books 2019 (UK) "[A] sparkling, anecdote-rich narrative." --The Times (UK) "A well-researched and compelling story...Drawing on an immense volume of material, [de Courcy] has succeeded not only in constructing an intriguing portrait of Chanel herself but also in expertly conjuring the two very different worlds that then existed side by side." --Selina Hastings, Literary Review (UK)

Praise for The Husband Hunters:

"[The American heiresses] were just what was needed to shake the cocktail and bring some pizazz to the party. De Courcy conjures it all with skill." --New York Times Book Review, Editor's Choice "A true account of the women who inspired Downton Abbey."--Vanity Fair Witty and well researched, Anne de Courcy brings to colorful, dramatic life these dollar princesses whose vast fortunes propelled them to glittering trans-Atlantic marriages that captivated international society.--Daisy Goodwin, New York Times bestselling author of The Fortune Hunter "Anglophiles fascinated by the intricate tribal codes of the British upper classes will find plenty to feed their interest." --Boston Globe "Vanderbilts, Astors, Churchills, Marlboroughs; diamonds, tiaras, yachts, mansions; all are documented in glorious detail and should satisfy those readers with insatiable thirst for all things peerage."--Booklist "Downton Abbey fans will swoon over this trip through the privileged turn-of-the-century world of cash, class, and coronets...De Courcy brings the Victorian and Edwardian eras vibrantly to life with her meticulously well-researched book, conveyed in an approachable prose style...A highly readable social history that contains all of the juicy drama of a prime-time soap opera." -Kirkus Reviews Amusing [and] breezily readable. --Washington Times

Anne de Courcy is the author of several widely acclaimed works of social history and biography, including THE HUSBAND HUNTERS, MARGOT AT WAR, THE FISHING FLEET, THE VICEROY'S DAUGHTERS and DEBS AT WAR. She lives in London and Gloucestershire.
If the item details above aren’t accurate or complete, we want to know about it.