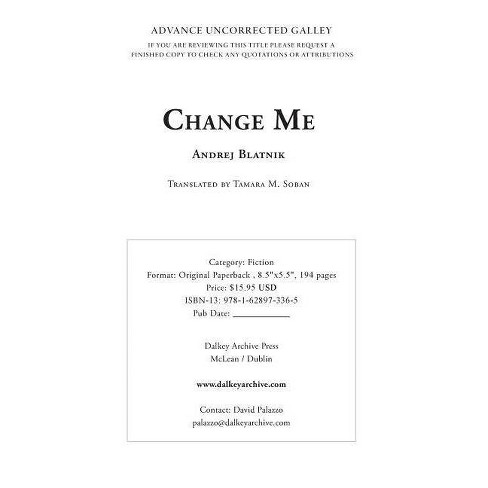 $12.29
no reviews yet
be the first!be the first! ratings
Shipping
Free standard shipping with RedCard
Loading, please wait...
Help us improve this page

"Global consumerism is a nightmare from which one nuclear family is trying to awaken.This novel was published in Blatnik's (Law of Desire, 2014, etc.) native Slovenia in 2008, making it all the more remarkable how timely, even prescient, it seems now. On the surface, it's a love story, beginning and ending with the same note from a husband to his wife, the wife he is leaving with their two sons, without warning. "It's here now, this story, all of it," he writes. "It's here to say: I love you." Though perhaps he has been warning her all along, perhaps the whole novel is a cautionary tale, one in which nothing is as simple as it seems, and the very notions of identity, character, free will, and choice are up for grabs. A passage referring to one character will end one chapter, and then the same passage will begin the next chapter, referring to the other, the husband and then the wife, or vice versa. ("Something had changed. Everything would have to be reorganized. It wasn't too late.") The man has not only walked away from his family, but from his computers, which he had once used as a musical mixer and later as a genius advertising sloganeer, "the boy wonder of his generation," who, according to his wife, was "so efficiently helping to maintain the smooth running of the conveyor belt of goods fetishism and consumerism." It was he who had come up with the "brand name for the toothpaste, DissiDent." Yet he has apparently come to revile the values that he long worked to promote, and so he has taken off while leaving his family well provided for. His wife finds herself torn between her professional obligations, running a firm that involves occupational retraining for this new globalism, and her personal fears and desires. Her life is also transformed by her husband's decision to transform his. By the end of the story, which ends where it began, little has changed and everything has changed. With some echoes of Kafka and Vonnegut, this novel looks for the soul of the 21st century and finds an abyss."
-- Kirkus Reviews, Starred Review "This is the novel we've been awaiting for many years." -- Vecer "Change Me is masterly written, unusual, significant--a novel of our time." -- Sodobnost "A textbook for coming generations of anti-globalists, in case they still read books in the future." -- Delo "Andrej Blatnik tells the story of compulsive change in which individual destiny and collective history change at the same pace, so that ultimately nothing changes." -- Lesen in Tirol "Blatnik plays confidently with the genres of trivial literature, using elements of science fiction and kitsch to equip his completely absurd and at the same time very realistic narrative cosmos. With subtle irony, he knows how to create that sense of strangeness and menace that can grasp people in the midst of well-organized progress." -- Deutschlandradio
If the item details above aren’t accurate or complete, we want to know about it. Report incorrect product info.