Checkmate in Berlin - by Giles Milton 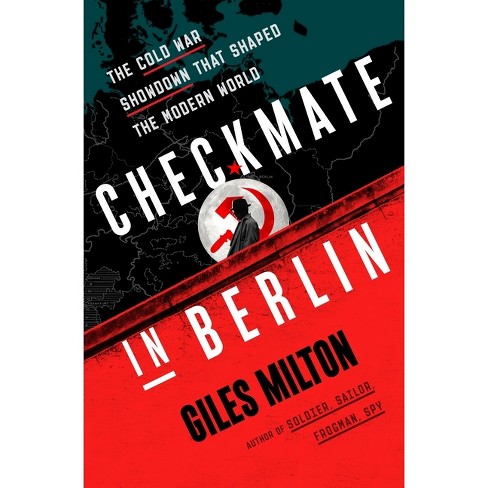 "The lively, immersive story of the race to seize Berlin in the aftermath of World War II that fired the starting gun for the Cold War"--

From a master of popular history, the lively, immersive story of the race to seize Berlin in the aftermath of World War II as it's never been told before

BERLIN'S FATE WAS SEALED AT THE 1945 YALTA CONFERENCE: the city, along with the rest of Germany, was to be carved up among the victorious powers-- the United States, Britain, France, and the Soviet Union. On paper, it seemed a pragmatic solution. In reality, once the four powers were no longer united by the common purpose of defeating Germany, they wasted little time reverting to their prewar hostility toward--and suspicion of--one another. The veneer of civility between the Western allies and the Soviets was to break down in spectacular fashion in Berlin. Rival systems, rival ideologies, and rival personalities ensured that the German capital became an explosive battleground. The warring leaders who ran Berlin's four sectors were charismatic, mercurial men, and Giles Milton brings them all to rich and thrilling life here. We meet unforgettable individuals like America's explosive Frank "Howlin' Mad" Howley, a brusque sharp-tongued colonel with a relish for mischief and a loathing for all Russians. Appointed commandant of the city's American sector, Howley fought an intensely personal battle against his wily nemesis, General Alexander Kotikov, commandant of the Soviet sector. Kotikov oozed charm as he proposed vodka toasts at his alcohol-fueled parties, but Howley correctly suspected his Soviet rival was Stalin's agent, appointed to evict the Western allies from Berlin and ultimately from Germany as well. Throughout, Checkmate in Berlin recounts the first battle of the Cold War as we've never before seen it. An exhilarating tale of intense rivalry and raw power, it is above all a story of flawed individuals who were determined to win, and Milton does a masterful job of weaving between all the key players' motivations and thinking at every turn. A story of unprecedented human drama, it's one that had a profound, and often underestimated, shaping force on the modern world - one that's still felt today.

"A lively story...Milton raises an interesting question that evokes the great film The Third Man: Who really ran Berlin in the late 1940s -- was it the Americans, Russians, British and French in their sectors, or was it the black marketeers playing the sectors against one another?"
--The New York Times Book Review "Truly unputdownable...Milton's history is not meant to be economic as much as it aims to inform readers about what happened not terribly long ago. His history is once again fascinating."
--Forbes "As gripping as any thriller...a wonderfully clear and digestible account."
--Craig Brown, Mail on Sunday "Expertly told...Milton has spun good yarn..."
--The Times "Brilliantly recapturing the febrile atmosphere of Berlin in the first four years after the Second World War, Giles Milton reminds us what an excellent story-teller he is, and how often and easily the Cold War could have grown red hot. From the major decision-makers in the four Allied Governments who ran the former Nazi capital, right down to the spooks, soldiers, crooks, and civilians at street level, he has an unerring sense for the revealing incident and hitherto-untold story."
--Andrew Roberts, author of Churchill: Walking with Destiny

"From the Yalta Conference to the birth of NATO, Checkmate in Berlin balances the sweep of history against a group of truly extraordinary personalities. Brilliantly written and completely absorbing, this is Milton's masterpiece."
--Anthony Horowitz, author of the #1 New York Times bestselling Alex Rider series "Giles Milton never disappoints. The man who helped to turn narrative history into one of the most popular genres in modern publishing, Checkmate in Berlin is up there with his best. Milton paints characters so vividly, and his writing has the momentum of a novel - only better, because it's all true."
--Dan Snow, host of the History Hit podcast "A sparkling account...the triumph of the book is its depiction of the men who ran things on the ground in Berlin...Milton has the John le Carré-esque ability to make meetings fascinating...told with a dark, ironic humour that makes the unedifying events thoroughly entertaining."
--The Daily Telegraph Historian Milton...captures in this immersive account the drama...of Berlin in the immediate aftermath of WWII....Full of vivid details and intriguing personalities, this is a page-turning chronicle of a noteworthy period in world history.
--Publishers Weekly ...Enlightens both avid readers and practicing historians with sketches of the foreign military leaders...Weaving together archival transcripts and an incredible array of secondary sources, this book satisfies on many levels...holds readers' attention from start to finish.
--Library Journal Praise for Giles Milton "In [Big Chief Elizabeth], an exceptionally pungent, amusing, and accessible historical account, Giles Milton brings readers right into the midst of these colonists and their daunting American adventure...there's no question that Mr. Milton's research has been prodigious and that it yields an entertaining, richly informative look at the past."
--New York Times "Giles Milton is a man who can take an event from history and make it come alive....He has a genius for lively prose and an appreciation for historical credibility. With Samurai William, he has crafted an inspiration for those of us who believe that history can be exciting and entertaining."
--The Times Milton is a meticulous researcher and masterful storyteller. Churchill's Ministry of Ungentlemanly Warfare, with its ghastly details and dollops of droll British humor, will reward readers who appreciate military history and good writing.
--USA Today (3.5 star out of 4) "White Gold is lively and diligently researched, a chronicle of cruelty on a grand scale. An unfailingly entertaining piece of popular history."
--Sunday Telegraph

Giles Milton is the internationally bestselling author of eleven works of narrative history, including Soldier, Sailor, Frogman, Spy: How the Allies Won on D-Day. His previous work, Churchill's Ministry of Ungentlemanly Warfare, is currently being developed into a major TV series. Milton's works--published in twenty-five languages--include Nathaniel's Nutmeg, serialized by the BBC. He lives in London and Burgundy.
If the item details above aren’t accurate or complete, we want to know about it.

The Story of Greece and Rome - by Tony Spawforth (Paperback)

Your Fantastic Elastic Brain Stretch It, Shape It - by Joann Deak (Hardcover)