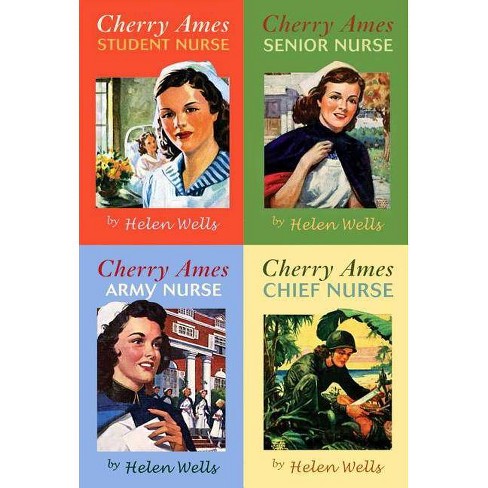 $39.99
no reviews yet
be the first!be the first! ratings
Shipping
Not available
Help us improve this page

With a heart of pure gold and a true yearning to make a difference in the world, eighteen-year-old Cherry Ames leaves her hometown and enters nursing school, embarking on a lifetime of adventures. Follow Cherry through the introductory four-book set as she grows from student nurse to chief nurse, all the while making friends, pushing the limits of authority, leading her nursing colleagues, and sleuthing and solving mysteries. Smart, courageous, mischievous, quick-witted, and above all, devoted to nursing, Cherry Ames meets adventure head-on whereever she goes.


Cherry Ames, Student Nurse
In Student Nurse, Cherry starts nursing school at Spencer with a mixture of anxiety and anticipation - would she have what it takes to be a nurse? She leaves her quiet town of Hilton, Illinois for the bustle of hospital life, to meet challenges she wouldn't have imagined. The U.S. is at war. Many nurses have gone to the front, and there is a shortage of RNs at Spencer-which Cherry and her classmates help to fill, as they learn the skills they need to graduate. And who is the mysterious patient in the secret room that no one seems to know anything about? Should Cherry risk expulsion to save his life?
Cherry Ames, Senior Nurse
In Senior Nurse, Cherry realizes that "a senior really must be a little more sober and responsible" - perhaps she should have warned the head nurse right away about the rabbit that had been smuggled into the pediatric ward. But the children had enjoyed it so! As "lofty" seniors, Cherry and her friends each "adopt" a probationer (first-year student) to mentor. Why did her probie have to be dull and sullen Mildred Burnham? Dr. Joe Fortune has discovered a new way to synthesize penicillin - which could make a life or death difference on the battle front. But how did word of it become common knowledge around Spencer? Cherry discovers that Mildred has more to her than she thought as together they face the dangerous thieves who have stolen Dr. Joe's formula.
Cherry Ames, Army Nurse
In Army Nurse, Cherry has made the difficult decision facing all her classmates - should she enlist in the military or practice nursing on the homefront? She's graduated from Spencer and earned the right to put "RN" after her name, and as an Army nurse, she is now "Lieutenant Ames." The Army nurses are also soldiers, and endure a grueling basic training under the harsh Sergeant Deake (whom Cherry nicknames "Lovey," much to his chagrin). No one knows where the Spencer unit will be deployed until they are shipped off without warning - to Panama City. Who is the mysterious old Indian whom Cherry and her corpsman Bunce find collapsed in an abandoned house? He is obviously very ill, but with what? Can Dr. Joe's newly developed serum help?
Cherry Ames, Chief Nurse
In Chief Nurse, Cherry is whisked off to a new assignment on an island in the Pacific close to the battlefront -as Acting Chief Nurse! Colonel Pillsbee thinks she is too "young and pretty" to successfully supervise sixty nurses and 200 corpsmen. Can she do it? For the first time Cherry and the nurses of the Spencer unit have to work under fire, in a makeshift tent hospital uncomfortably close to the fighting. When the casualties pour in, the nurses and doctors work night and day, constantly under danger of attack by the Japanese. When the other Lieutenant Ames, Cherry's twin brother Charlie, is unexpectedly stationed nearby, Charlie and Cherry piece together the mystery behind the silence of an injured pilot - which involves a secret enemy weapon.

Click here to read about Cherry Ames in The New York Times!"
If the item details above aren’t accurate or complete, we want to know about it. Report incorrect product info.