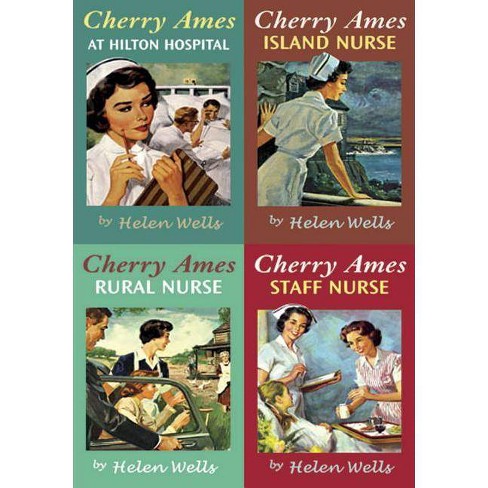 $24.49
no reviews yet
be the first!be the first! ratings
Shipping
Not available
Help us improve this page


Cherry Ames, Hilton Hospital Nurse
In Hilton Hospital Nurse, one of the strangest cases of Cherry Ames' absorbing career comes her way while working as a staff nurse at Hilton Hospital in her home town. A young man, victim of a car accident, is brought to Emergency with a broken leg. Shortly after he is admitted to the hospital, the doctors discover that "Bob Smith" has been suffering from amnesia for several months.

Who is he? Where is his home? What tragic happening caused such distress that his memory is a blank? Answers to these questions must be found if "Bob" is to be cured.

Working under the direction of the medical and psychiatric doctors, Cherry plays a crucial role in helping the patient to get well and to find a solution to the dilemma that caused his "flight from memory." Clues develop as the psychiatrist uses various techniques to help the patient recapture his lost memory. "Bob Smith" insists that he is guilty--but of what he cannot recall. During her free time, Cherry follows up obscure clues and encounters suspiciously difficult people and an alarmingly tangled situation.

Here is a fascinating story that will be long remembered by the lovable nurse heroine's legions of admirers, both young and young at heart.


Cherry Ames, Island Nurse
In Island Nurse, Nurse Cherry doesn't realize when distinguished Sir Ian Barclay is rushed by his nephew Lloyd to Hilton Hospital that her newest case will carry her north to misty, sea-beaten Balfour Island, off the rugged coast of wind-swept Newfoundland. "Sudden hemorrhage of a peptic ulcer," Dr. Joe Fortune had quickly diagnosed, and Cherry is assigned to care for the truculent but endearing old Scotsman. Cherry soon suspects that more than illness is worrying the peppery owner of the Balfour Iron Mines, and her suspicions only deepen upon their arrival at Barclay House on Balfour Island.

True, there is trouble at the mines. But the mysterious actions of Sir Ian's erstwhile friend, Jock Cameron, force Cherry to conclude that trouble of even greater consequence is in the making. What hold does the industrialist Broderick have over Sir Ian? Who is "Little Joe" Tweed, and why does his trawler Heron ride at anchor off Balfour Island?

The startling solution to this baffling mystery waits for Cherry in three different places: deep in the salt-stained recesses of Rogues' Cave, in the musty tower room of Barclay House, and in the hole on the hill. But first Cherry must face the effects of an island storm, as she and the island doctor struggle to save the crew of a shoal-wrecked boat.


Cherry Ames, Rural Nurse
In Rural Nurse, as a public health nurse in Iowa, Cherry works with federal authorities to quash the manufacture and distribution of a bogus remedy and discovers the secret of a decrepit, abandoned farmhouse.
Cherry Ames, Staff Nurse
In Staff Nurse, when Cherry Ames learns that the new patient in her ward is using the proceeds from her deceased husband's life insurance to speculate in stock, she judges her foolish. And when the young woman explains the Pell Corporation investment program, Cherry suspects that her patient is being swindled.

Even more serious, Peggy Wilmot is jeopardizing her health. For emotional tension over the delayed arrival of her weekly dividend check is retarding her recovery. But how can Cherry influence the headstrong young woman who seeks financial help from the wrong people? Find out the truth about the Pell Corporation, Cherry decides, and let the facts speak for themselves.

Some of the vital questions to which Cherry must find the answers are: What are the Pell Corporation's actual operations as distinguished from the fantastic claims made in its impressive brochures? Is the mysterious Cleveland Pell really the financial wizard he claims to be? Busy with ward duty and a training program for teen-age junior volunteers at Hilton Hospital, Cherry does not have much time for another extracurricular task. But the plight of Peggy Wilmot is too serious to be ignored.

What Cherry learns in the mysterious world of the "high finance" confidence game will surprise the reader as much as it does America's favorite nurse heroine.


Click here to read about Cherry Ames in The New York Times!"
If the item details above aren’t accurate or complete, we want to know about it. Report incorrect product info.