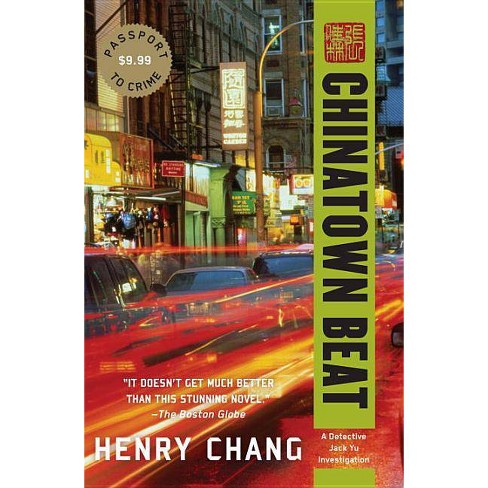 Detective Jack Yu is assigned to the Chinatown precinct as the only officer of Chinese descent. He investigates a series of attacks on children and a missing mistress, shifting between the world of street thugs and gangs and the Chinatown of the rich and powerful. When Detective Jack Yu is transferred to New York's Chinatown, he isn't ready to face the changes in his old neighborhood. His childhood friends are now hardened gangsters, his father is dying, and he is constantly reminded of this teenage blood brother, murdered in front of him years before. Then community leader and tong boss Uncle Four is gunned down and his mistress goes missing. But unlike the rest of the culturally clueless police department, Jack knows his district's gritty secrets. He will have to draw on his knowledge in order to catch this killer in a crime-ridden precinct where brotherhoods are just as likely to distribute charity as mete out vigilante justice.

Praise for Chinatown Beat "Chang has a cool, measured style that lets in some light . . . on a society that lives by its own rules."
--The New York Times Book Review

"For readers who relish noir suspense, it doesn't get much better than this stunning novel."
--The Boston Globe "All the expected locales are here--gambling and dance halls, brothels, secret societies--but the author, who grew up in Chinatown, keeps things fresh by inserting Chinese phrases and explicating cultural folkways on nearly every page . . . This is a nasty, terse slice of noir, and Yu is a fellow whose adventures should be worth following."
--Washington Post Book World "Chinatown Beat is a classic noir, filled with longing, violence, and that uniquely urban melancholy, but it also brings something new to the table, a loving specificity of a people and place, the multicultures of New York's Chinatown, that has rarely if ever been encountered in fiction before. A real discovery."
--Richard Price, author of Lush Life, a New York Times Notable Book of the Year "Here's a dark slice of New York's Chinatown that most of us . . . have probably never seen. Henry Chang takes us on an unforgettable guided tour of its lower depths. In a field awash with pallid noir thrillers, this one is the real thing. A genuine winner."
--Herbert H. Lieberman, author of City of the Dead and Shadow Dancers "A dramatic evocation of the exotic . . . More rewarding than a trip to Chinatown."
--Qiu Xiaolong, author of Death of a Red Herione

"Chang's debut novel is one of this year's most impressive. Here, the object isn't to figure out whodunit . . . The suspense comes from tracking Jack Yu through his investigation, navigating the shifting tides of Chinese turf wars, generational tension, and his own internal struggle with being a 'standup Chinaman' and an effective cop. This is a character well worth knowing."
--January Magazine, Best Crime Fiction of 2006

A lifetime New Yorker, Henry Chang was born and raised in New York's Chinatown, where he still lives. Chang's writing often focuses on the world of Chinese immigrants. A graduate of CCNY, he is the author of the acclaimed Year of the Dog, Red Jade, and Death Money, also known as the Detective Jack Yu series. Henry Chang can be found online at Chinatowntrilogy.com.
If the item details above aren’t accurate or complete, we want to know about it. Report incorrect product info.