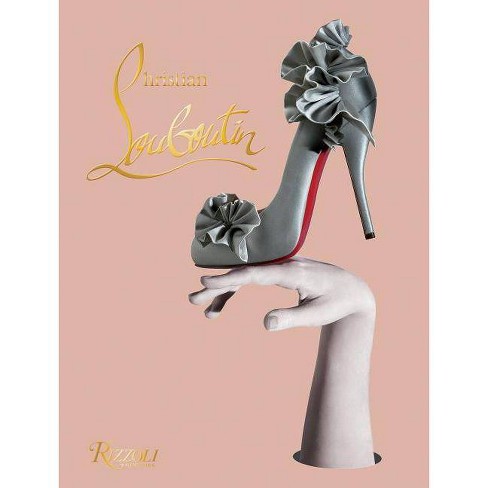 Issued with an attached, hard, folded cover over the front cover which has a pop-up illustration on its inside.

An extraordinary monograph created by Christian Louboutin, renowned for his beautifully crafted handmade shoes, in particular his elegantly sexy stilettos. This stunning volume, with a fanciful and intricate pop-up, an elaborate foldout cover, and dramatic still-life photography, evokes the artistry and theatricality of Louboutin's shoe designs. Celebrated for his vertiginously high stilettos with their signature lacquer-red soles, Louboutin has achieved cult status with celebrities as well as fashionistas. His eclectic and exotic designs, often incorporating feathers, beads, and sequins, are a constant and dramatic presence on the red carpet and in nightclubs and restaurants the world over. Louboutin's first book, this monograph highlights the extraordinary range of his couture, from his iconic and glamorous creations to his fetishistic pieces, including his collaborations with David Lynch, meant more for the bedroom than the street. New photography captures Louboutin's artistic sensibilities, while an in-depth interview reveals Louboutin's life, travels, and inspirations, presenting a very personal look at the man behind the shoes. A work of art in itself, with a five-piece foldout binding and a pop-up, Christian Louboutin is an enticing and revelatory look at the most important luxury shoe designer of our day.
The book is divided into six chapters. The first chapter covers Louboutin's biography, his start as a designer from his work for Chanel and Yves Saint Laurent to his first boutique in 1992, and his early creations and influences illustrated with many never-seen-before photos from his personal archives; chapter two features the Louboutin boutiques around the world showcasing the varied and extravagant interior designs and displays; chapter three is 20 years of design and highlights his shoe designs from over the years with all-new still-life photography, as well as editorial art; chapter four features the spectacular interiors of Louboutin's homes in Paris and Luxor, Egypt, and behind-the-scenes shots from his studios and workshops; chapter five focuses on his creative collaborations with David Lynch, of a series called Fetish, of limited-edition shoes by Louboutin and limited-edition photos by Lynch; chapter six is a complete catalogue raisonne of his work, with photos of all 120 shoe designs.

-- Louboutin's book will have you craving for another scarlet-soled pair in no time. Plastik A stunning volume, it features a 5-piece fold-out cover, a binding of pink faux-leather, a magical interior pop-up, as well as gilded pages. With five chapters--A Life; The Shoes; Fetish; The Places; and Twenty Years--this elegant monograph reveals the artistry and theatricality of Louboutin's shoe designs, from his iconic stilettos to his fetishistic pieces and everything in between. FashionWindows.net

Philippe Garcia is a French fine art and commercial photographer whose work is regularly seen in such magazines as Marie Claire Maisons. Eric Reinhardt is a writer and editor who lives in Paris. His recent novel, Cinderella, was a critical and commercial success. He currently edits art books for a variety of prestigious French publishers. John Malkovich is an actor, director, producer and costume designer who also has his own line of men's clothing.
If the item details above aren’t accurate or complete, we want to know about it. Report incorrect product info.