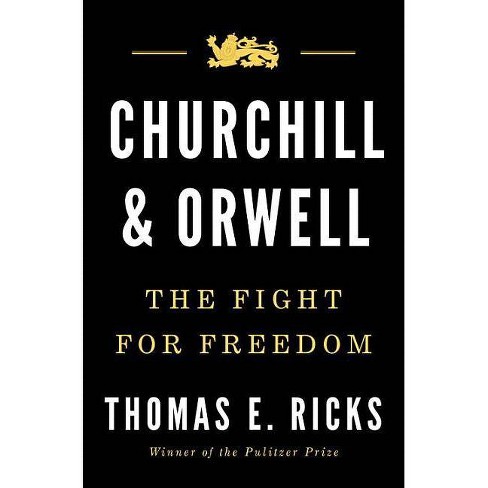 $28.49
no reviews yet
be the first!be the first! ratings
Shipping
Not available
Help us improve this page

"Both subjects, he tells us in this page turner written with great brio, are 'people we still think about, people who are important not just to understanding their times but also to understanding our own.'... what comes across strongly in this highly enjoyable book is the fierce commitment of both Orwell and Churchill to critical thought." --The New York Times Book Review "An elegantly written celebration of two men who faced an existential crisis to their way of life with moral courage -- and demonstrated that an individual can make a difference." --San Francisco Chronicle "Readers of this book will realize, if they needed reminding, that the struggle to preserve and tell the truth is a very long game." --Los Angeles Times

"Another one is a book by Thomas Ricks about Winston Churchill and George Orwell. The two never met, but their parallel lives and their views of how society should function, notions of individual freedom, limitations of politics and so on -- extraordinarily harmonious thoughts in different places, really very impressive. I went in assuming [they'd be at odds], but quite the reverse. Really, very interesting."-- John Le Carrï¿½ "Churchill & Orwell is an eminently readable, frankly inspirational and exceptionally timely tribute to the two men Simon Schama called 'the architects of their time.' It is to be hoped that their counterparts in intellectual clarity and moral courage are among us today." --Minneapolis Star Tribune "A pungent and pointed piece of history, a great gift for any history lover on your list." -- Seattle Times "Here is a formidable pairing: Winston Churchill and George Orwell, two of the most famous figures of the 20th century, compared and contrasted in a study that has fresh things to say about its subjects... Ricks tracks his subjects without falling into the usual traps. He is neither sanctimonious about Orwell, nor overly reverential when discussing Churchill." --Newsday "A feast of a book, laden with observations and insights that enable us to see these familiar figures, and through them our own time, in a fresh and illuminating light." --New Statesman "Ricks's gift for storytelling makes this book virtually impossible at times to set down." --The Christian Science Monitor "Superbly illustrates that Churchill and Orwell made enduring cases for the necessity of moral and political fortitude in the face of authoritarianism. This is a bracing work for our times."--Publishers Weekly "Very readable and timely."--The Missourian
"The genius of Ricks' method is to tell the story of an ongoing struggle through the lives of two extraordinary men." --Booklist (starred review) "A superb account of two men who set standards for defending liberal democracy that remain disturbingly out of reach." --Kirkus Reviews (starred)
If the item details above aren’t accurate or complete, we want to know about it. Report incorrect product info.