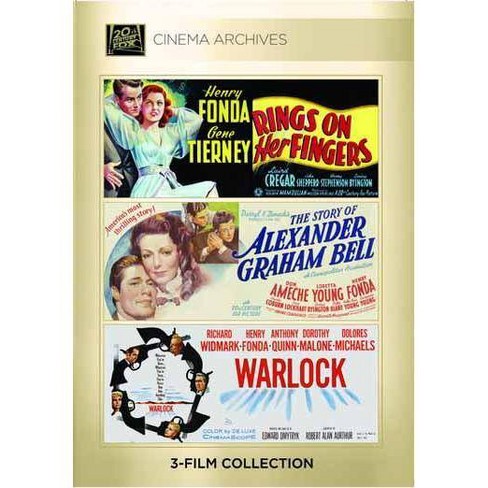 $35.99
MSRP$39.95
no reviews yet
be the first!be the first! ratings
Buy 2 get 1 free on video games, movies and books
Online only •
Shipping
Not available
Help us improve this page

The Story of Alexander Graham Bell This fictionalized biography of the famed American inventor's life provided actor Don Ameche with his signature role. For years after its release, people even referred to the telephone as "an Ameche." The story begins in 1873 Boston as Bell endeavors to teach deaf people to speak in the manner invented by his father. When not teaching, Bell tinkers with his various inventions. Opportunity knocks when Bell is befriended by an aristocratic fellow (Charles Coburn) who wants Bell to help teach his daughter (Loretta Young) to speak. Bell agrees and falls in love with her. It is she who inspires and encourages him to invent the telephone, while it is young Watson (Henry Fonda) who assists him. After they meet with success, the inventors must do battle in court with Western Union, the company that held the patent to the telegraph.

Rings on Her Fingers Director Rouben Mamoulian completed a three-picture 20th Century Fox deal with this airy comic romance that attempted to ape the story and style of the previous year's The Lady Eve (1941) but without that film's success. While vacationing in Southern California, accountant John Wheeler (Henry Fonda) intends to purchase a boat, a luxury for which he's saved long and hard on his limited income. Maybelle (Spring Byington) and Warren (Laird Cregar), a pair of grifters on the prowl for a mark, overhear John discussing the upcoming transaction and mistake him for a millionaire. They persuade pretty sales clerk Susan Miller (Gene Tierney) to help them dupe John by pretending to be their daughter and fall in love with him. As the couple spends time together, however, Susan really does fall in love with John. She backs out of her agreement with the con artists, tells John the truth, and learns that he's not a man of means. The truth does nothing to diminish their feelings for each other, and the happy couple marries, but Warren and Maybelle are not quite done with Susan yet, and they embark on a scheme to find her a real millionaire.

Warlock Warlock offers us a mean-spirited, mercenary Henry Fonda and an honest, peaceloving Richard Widmark. A Wyatt Earp-like frontier marshal, Fonda agrees to protect the small town of Warlock from an outlaw gang, but only if he's permitted to plunder the town's cash reserve. Widmark, the town deputy, is a reformed outlaw whose willingness to fend off the invading criminals is motivated by his fondness for his new neighbors. Looming large in the proceedings is Anthony Quinn as the glory-grabbing Fonda's sidekick. Adapted by Robert Alan Aurthur from a novel by Oakley Hall, Warlock is a good example of the "thinking man's westerns" prevalent in the late 1950s-early 1960s.
If the item details above aren’t accurate or complete, we want to know about it. Report incorrect product info.