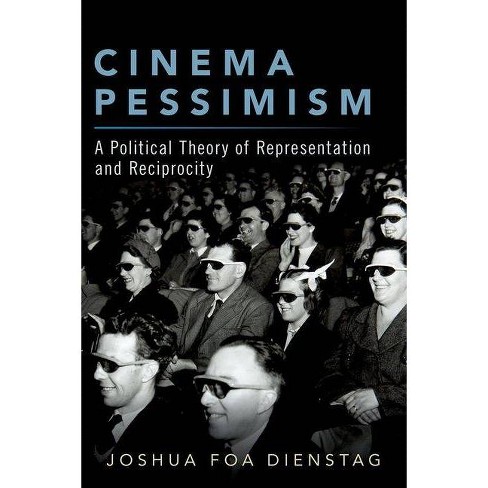 $29.95
no reviews yet
be the first!be the first! ratings
Shipping
Free standard shipping with RedCard
Loading, please wait...
Help us improve this page

"How can the movies instruct us in the forms and feelings of democratic representation? How does political theory explain our attachments to cinematic realism and our investments in characters that resemble us? Exploring these questions, Cinematic Pessimism mounts a critique of our 'representative condition, ' namely the collective desire that the movies and our elected leaders reflect us in near every detail. From his inventive reading of such films as Blade Runner, Her, The Man Who Shot Liberty Valance, and Up we learn that perfect representation may inhibit our freedom, happiness, and capacity for mutual regard. Cinema dramatizes this dilemma and, in Dienstag's reading, helps us to think beyond it. Anyone wanting to understand the aesthetic allure of democratic representation needs to read this compelling book." -- Jennifer Fay, author of Inhospitable World: Cinema in the Time of the Anthropocene
"Cinema Pessimism vividly demonstrates the importance of film to democratic theory's ongoing reassessment of political representation. Through brilliant engagements with such films as Blade Runner, Her, and The Man Who Shot Liberty Valence, Dienstag reveals the limitations of prevailing theoretical models and develops his own distinctively "pessimist" argument about political representation's fraught role as both an enabler and an obstacle to democratic freedom. This book makes a decisive contribution to the political theory of film." -- Jason Frank, Robert J. Katz Chair of Government, Cornell University
"Studies of the political significance of film often worry that political life is threatened by the widespread passion for movies, in much the way that it is supposedly threatened by comics, rock'n'roll, rap, or the 'boob tube.' Dienstag's worry is deeper. In five lucid and provocative readings of films such as Her and Europa, he explores the prospect that filmic representation of the world itself reveals the possibilities and especially the dangers of the seemingly quite different representation of people and interests in contemporary politics. The result might be described as an updating of Rousseau's critique of the theater for our time." -- Andrew Norris, University of California, Santa Barbara, and author of Becoming Who We Are: Politics and Practical Philosophy in the Work of Stanley Cavell
If the item details above aren’t accurate or complete, we want to know about it. Report incorrect product info.