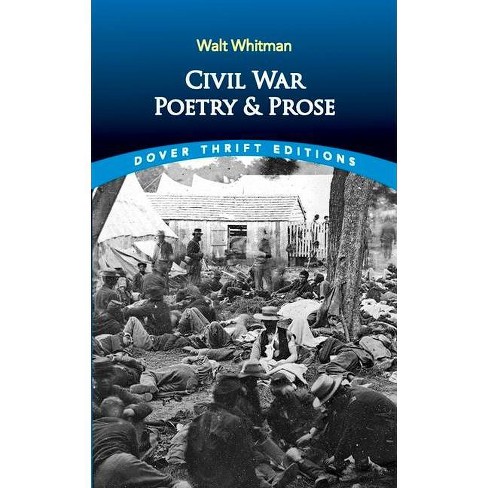 Poems, letters, and prose from the war years include "O Captain! My Captain!" "When Lilacs Last in the Dooryard Bloom'd," "Adieu to a Soldier," and many other moving works.

Walt Whitman experienced the agonies of the Civil War firsthand, working, in his forties, as a dedicated volunteer throughout the conflict in Washington's overcrowded, understaffed military hospitals. This superb selection of his poems, letters, and prose from the war years, filled with the sights and sounds of war and its ugly aftermath, express a vast and powerful range of emotions.
Among the poems include here, first published in Drum-Taps (1865) and Sequel to Drum-Taps (1866), are a number of Whitman's most famous works: "O Captain! My Captain!" "The Wound-Dresser," "When Lilacs Last in the Dooryard Bloom'd," and "Come Up from the Fields, Father." The letters and prose selections, including Whitman's musings on the publication of his works, on the wounded men he tended, and his impressions of Lincoln traveling about the city of Washington, offer keen insights into an extraordinary era in American history.

One of America's most influential and innovative poets, Walt Whitman (1819-92) worked as a teacher, journalist, and volunteer nurse during the Civil War. Proclaimed as the nation's first "poet of democracy," Whitman reached out to common readers and opposed censorship with his overt celebrations of sexuality.