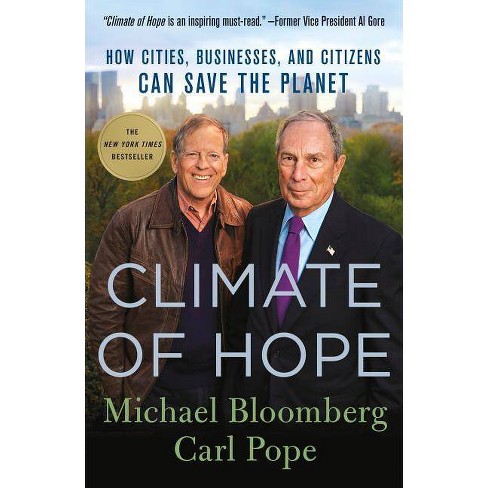 "In their new book, Climate of Hope, Michael Bloomberg and Carl Pope provide readers with a wonderful, in-depth analysis of how municipalities, businesses and private citizens are proving to be a bold force in solving the greatest challenge of our time--the climate crisis. This book gives readers the opportunity to benefit from the wisdom of two highly successful individuals who have taken distinct paths to ensuring that their own communities and organizations have a tangible impact in securing our sustainable future. Climate of Hope is an inspiring must-read for anyone who wants to know how their local actions can have positive and significant impacts on the world." --Former Vice President Al Gore, Chairman of The Climate Reality Project

"If Trump is looking for a blueprint, he could not do better than to read a smart new book, Climate of Hope." --Thomas Friedman in The New York Times

"Meeting our world's growing energy demands will require contributions from science, business and government. As Climate of Hope shows, Michael Bloomberg has a unique understanding of the importance of this collaborative approach. Michael's leadership and optimism remind us that by working together, we can develop breakthrough innovations to reduce the cost and increase the reliability of clean energy technology." --Bill Gates, co-chair of the Bill & Melinda Gates Foundation

"Climate change threatens to reshape the future of our world's population centers. Bloomberg and Pope have been leaders on fortifying our cities against this threat, and their book proves that victory is possible--and imperative." --Leonardo DiCaprio

"A book that glows with the optimism of levelheaded reason. Keenly attuned to political realities, Climate of Hope bypasses the fraught debates over long-term climate change, focusing instead on the immediate consequences of pollution." --New York Magazine

"A hopeful book of strategies for delivering the planet from our worst environmental depredations. ...a thoughtful, eminently reasonable set of proposals." --Kirkus

"Upbeat, pragmatic, eloquent, and supremely well-informed, Bloomberg and Pope present striking statistics, cogently describe diverse examples of energy reforms and innovations across the U.S. and around the world, and make clear on both personal and social levels why a low-carbon future is possible, necessary, and of great benefit to everyone." --Booklist (starred)

"[Bloomberg & Pope's] divergent insights offer a three-dimensional examination of the crisis as well as accessible solutions, innovative suggestions and a plethora of benefits. Most importantly, their positive, forward-looking attitude is inspiring and attainable. Bloomberg and Pope's collaborative work epitomizes the unity needed to solve climate change, and they set an example to follow." --Shelf Awareness

"Thanks in no small part to Michael Bloomberg, mayors around the world are proving day after day that cities can tackle climate change. There are three things we need to do: act, act and act again. This is the first book that explains how." --Anne Hidalgo, mayor of Paris

"Michael Bloomberg and Carl Pope show that cities demonstrate how a bottom-up approach to climate action is not only possible, but also necessary--and how all of us have a role to play." --Carol Browner, former EPA Administrator & White House Climate Advisor

"Climate of Hope couldn't be more timely--or more necessary. Its optimistic and can-do spirit is exactly what made a global agreement possible. Now, Bloomberg and Pope provide a roadmap for making it a success." --Christiana Figueres, Former Executive Secretary of the UNFCCC