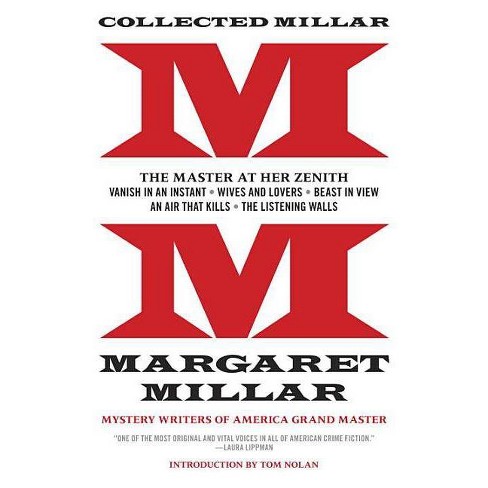 $14.39
MSRP$17.99
no reviews yet
be the first!be the first! ratings
Shipping
Free standard shipping with RedCard
Help us improve this page

PRAISE FOR COLLECTED MILLAR A Boston Globe Best Book of 2016 "Millar's mysteries are filled with clever twists, yet what makes them special is her surgical approach to her characters' inner lives. She's got an eagle eye for the juicy stuff lots of mystery writers still ignore--questions of class, status, sexual desire and the difficult position of women. This last was something she knew about firsthand. Millar's work was long overshadowed by that of her husband, detective novelist Ross Macdonald. In fact, her best novels -- like 1955's Beast in View -- have a ferocious edge that make him look rather tame."
--John Powers, NPR's Fresh Air "One of the greatest this country has ever produced."
--The Globe and Mail "[Millar] writes with care and devises clever plots, holding back plenty of surprises until she is ready to let the reader know... She exhibits a virtuoso talent for creating distinct identities for her characters, even if they might have more than one identity."
--The Buffalo News "A writer whose own work is every bit as psychologically bruising and critically acclaimed as that of her husband [Ross Macdonald], if not as well known. But [Syndicate Books] hopes to rectify that with Collected Millar."
--Kevin Burton Smith, Mystery Scene Magazine "Razor-sharp."
--The Seattle Times "A major project."
--Alfred Hitchcock Mystery Magazine "Classic, taut, original prose."
--Campus Circle PRAISE FOR MARGARET MILLAR

"One of the most original and vital voices in all of American crime fiction."
--Laura Lippman "I long ago changed my writing name to Ross Macdonald for obvious reasons."
--Kenneth Millar (Ross Macdonald), in a letter to the Toronto Saturday Night newspaper "Very Original."
--Agatha Christie

"She has few peers, and no superior in the art of bamboozlement."
--Julian Symons

"Written with such complete realization of every character that the most bitter antagonist of mystery fiction may be forced to acknowledge it as a work of art."
--Anthony Boucher reviewing Beast in View for the New York Times

"Margaret Millar can build up the sensation of fear so strongly that at the end it literally hits you like a battering ram."
--BBC "Wonderfully ingenious."
--The New Yorker

"Brilliantly superlative... One of the most impressive additions to mystery literature--and the word "literature" is used in its fullest sense."
--San Francisco Chronicle

"In the whole of crime fiction's distinguished sisterhood, there is no one quite like Margaret Millar."
--The Guardian

"Mrs. Millar doesn't attract fans she creates addicts."
--Dilys Winn, namesake of the Dilys Award
If the item details above aren’t accurate or complete, we want to know about it. Report incorrect product info.