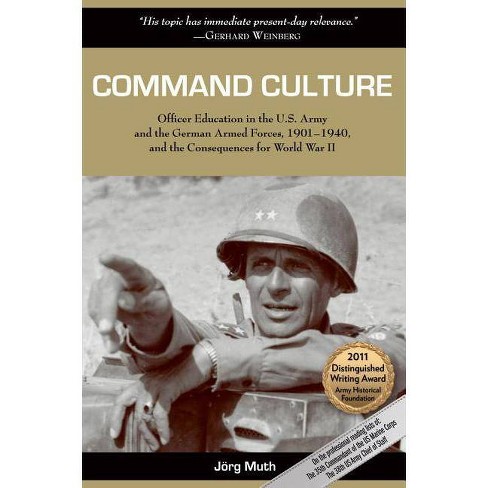 Selected by General Raymond Odierno, 38th Army Chief of Staff, for the U.S. Army Chief of Staff's Professional Reading List, for "The Army Profession," 2012.
Selected by Lieutenant General David Morrison, Chief of Army (Australia), for the Chief of Army's Reading List, 2012.Selected by General James F. Amos, Commandant of the U.S. Marine Corps, as required reading for all senior enlisted men and all Majors and Lieutenant-Colonels, 2013.Selected by Major General H.R. McMaster at the Maneuver Center of Excellence, Fort Benning, for the Leader Development Study Program, 2013.
Winner of the Army Historical Foundation Distinguished Writing Award, 2012.
In Command Culture, Jï¿½rg Muth examines the different paths the United States Army and the German Armed Forces traveled to select, educate, and promote their officers in the crucial time before World War II. Muth demonstrates that the military education system in Germany represented an organized effort where each school and examination provided the stepping stone for the next. But in the United States, there existed no communication about teaching contents or didactical matters among the various schools and academies, and they existed in a self chosen insular environment. American officers who finally made their way through an erratic selection process and past West Point to the important Command and General Staff School at Fort Leavenworth, Kansas, found themselves usually deeply disappointed, because they were faced again with a rather below average faculty who forced them after every exercise to accept the approved "school solution."
Command Culture explores the paradox that in Germany officers came from a closed authoritarian society but received an extremely open minded military education, whereas their counterparts in the United States came from one of the most democratic societies but received an outdated military education that harnessed their minds and limited their initiative. On the other hand, German officer candidates learned that in war everything is possible and a war of extermination acceptable. For American officers, raised in a democracy, certain boundaries could never be crossed.
This work for the first time clearly explains the lack of audacity of many high ranking American officers during World War II, as well as the reason why so many German officers became perpetrators or accomplices of war crimes and atrocities or remained bystanders without speaking up. Those American officers who became outstanding leaders in World War II did so not so much because of their military education, but despite it.
If the item details above aren’t accurate or complete, we want to know about it. Report incorrect product info.