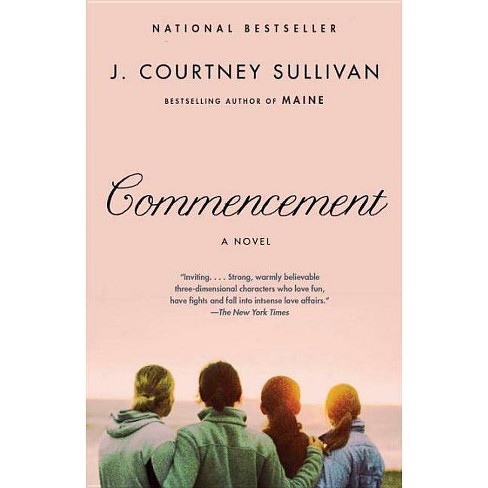 $14.95
undefined out of 5 stars with 0 reviews
be the first!be the first! ratings
Help us improve this page

In this sparkling debut novel, four very different young women develop a bond when they are assigned to the same dorm in their freshman year of college. When they reunite for a wedding four years after graduation, their friendships have changed, but they remain fiercely devoted to one another.

The bestselling author of Maine brings us a sparkling tale of friendship and a fascinating portrait of the first generation of women who have all the opportunities in the world, but no clear idea about what to choose. Assigned to the same dorm their first year at Smith College, Celia, Bree, Sally, and April couldn't have less in common. Celia, a lapsed Catholic, arrives with a bottle of vodka in her suitcase; beautiful Bree pines for the fiancé she left behind in Savannah; Sally, preppy and obsessively neat, is reeling from the loss of her mother; and April, a radical, redheaded feminist wearing a "Riot: Don't Diet" T-shirt, wants a room transfer immediately. Written with radiant style and a wicked sense of humor, Commencement follows these unlikely friends through college and the years beyond, brilliantly capturing the complicated landscape facing young women today.

"One of the year's most inviting summer novels. . . . A smart, discerning book about school years. . . . Sullivan introduces strong, warmly believable three-dimensional characters who have fun, have fights and fall into intense love affairs. . . . Gloria Steinem likes Commencement. She ought to; the women of Commencement are big fans of hers." --The New York Times

Offer[s] a witty take on the stereotypes of women's colleges, much as Curtis Sittenfeld's Prep did with elite boarding schools. . . . Sullivan's gifts are substantial. --The New York Times Book Review "Manages to find that sweet spot between Serious Literature and chick lit. Commencement is a beach book for smart women." --Entertainment Weekly "This story about four Smith College students and the paths they follow post-graduation celebrates friendship and explores modern-day feminism. At the same time, it's just a really devourable read--think a 2009 version of Mary McCarthy's The Group." --Cookie magazine "Commencement is much more than a novel about academia or young women. It's a thoughtful, engrossing study in lives transformed and relationships realigned, full of details and dilemmas that speak to a broad audience." --The Onion's A.V. Club "Sullivan is a keen observer, with a wry sense of humor." --Chicago Tribune "Garnering rave reviews. . . [Commencement] delves into the complex choices young women face today." --The Boston Globe "Take Mary McCarthy's The Group, add a new feminist generation striving to understand everything from themselves and their mothers to the notion of masculinity that fuels sex trafficking, and you get this generous-hearted, brave first novel. Commencement makes clear that the feminist revolution is just beginning." --Gloria Steinem, co-founder of Ms. "Brave. . . . Sullivan . . . excels at close-up portraits. . . . A novel with so much verve." --The New York Times Book Review "Sullivan writes fiction you might expect from a journalist: Her clean, precise prose stays carefully neutral and balanced, even as she shifts points of view from chapter to chapter. . . skillfully blending their stories. . . . Their struggles, reactions and decisions feel real. How they pull through--and pull together--proves inspiring." -Philadelphia City Paper ­"Convincing and unique."--Elle (Winner of the Elle Readers Prize) "As [Commencement] takes the women from their first shaky steps toward independence through the ups and downs of their 20s, you'll relive--and celebrate--the stomach-dropping moments of the best friend-relationship roller-coaster." --Redbook

"Totally entertaining." --The New Haven Register "[Commencement is] layered with love and honesty and promises that friendship perseveres when nothing else might or seems to." --Glamour.com

"Sullivan's debut novel, Commencement, works like a backstage pass to a world I barely knew existed--the elite contemporary women's college, the world of Smithies--with their rampant anagrams (including my favorite, S.L.U.G., Smith Lesbian Until Graduation), fluid and complex sexuality, eccentric traditions, arch politics, and, most of all, incredibly deep and enduring friendships." --Bridget Asher, author of My Husband's Sweethearts "Many writers have tried to duplicate The Group. . . J. Courtney Sullivan comes admirably close. McCarthy was very much of her era, and so is Sullivan." -Entertainment Weekly "Sullivan has honed in on so much of the utter anguish of adolescence and young adulthood. Her characters are brilliantly flawed, intensely realistic, thoroughly compassionate, and often incredibly funny." --BookPage "Commencement is an accomplished, compulsively readable novel about the intricate bonds of female friendship. A literary page-turner at once entertaining and moving." --Dani Shapiro, author of Black & White "Sullivan's description of Smith's strange social mores are nuanced and precise, conveying with a refreshing sense of humor the challenges and frustrations that Smith brings while still making plain her deep love for the college. Women who read Commencement will undoubtedly feel a part of the sisterhood." --Louisville Courier-Journal "In the spirit of Curtis Sittenfeld's Prep and Mary McCarthy's The Group, J. Courtney Sullivan delivers an engrossing, multi-layered tale of women, friendship, and the fascinating institution of higher education that shapes and influences them. Commencement is the can't-put-it-down novel that you will recommend to your best friends this summer." --Elin Hilderbrand, author of Barefoot "I was deeply engaged by the characters and their complexity. . . . One of the differences between fiction and literature is that the latter thrives on layers of ambiguity and ambivalence, and in Commencement I see the launch of a literary career." --Nicholas Kristof, nytimes.com "Sullivan writes with a verve and ambition that makes the novel's four friends into real women, besieged--as real women are--by confusion, joy, and compromise. I enjoyed every page of Commencement." --Martha Moody, author of Best Friends and The Office of Desire

J. COURTNEY SULLIVAN is the New York Times bestselling author of the novels The Engagements and Maine. Maine was named a 2011 Time magazine Best Book of the Year and a Washington Post Notable Book. The Engagements was one of People Magazine's Top Ten Books of 2013 and an Irish Times Best Book of the Year, and has been translated into seventeen languages. She has contributed to The New York Times Book Review, the Chicago Tribune, New York magazine, Elle, Glamour, Allure, Real Simple, and O: The Oprah Magazine, among many other publications. She lives in Brooklyn, New York.
If the item details above aren’t accurate or complete, we want to know about it. Report incorrect product info.