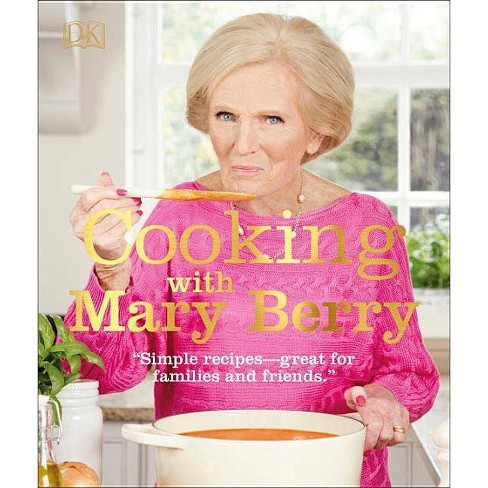 Cooking with Mary Berry covers a broad selection of recipes--brunch ideas, soups, salads, appetizers, mains, sides, and desserts--drawing on Mary's more than 60 years in the kitchen. Many, like her French Onion Soup, Steak Diane, and Cinnamon Rolls, are familiar classics, but all have been adapted to follow Mary's prescription for dishes that are no-fuss, practical, and foolproof. Step-by-step instructions, tips, and tricks make following in the footsteps of Britain's favorite chef easy, and full-color photographs of finished dishes provide inspiration along the way.

Perfect for cooks who are just starting out--and anyone who loves Mary Berry--the straightforward yet special recipes in Cooking with Mary Berry will prove, as one reviewer has said of her recipes, if you can read, you can cook.

[A] go-to volume, with the flair that Berry's growing U.S. fan base will expect. -- Booklist

The tasty treats we've gathered from the book are sure to warm your home...this season. -- TheNest.com

Mary Berry is one of the UK's best-loved and most-respected cooking writers and bakers, with more than 80 books to her name and over 6 million copies sold. She is a judge on the primetime ABC series The Great Holiday Baking Show and the PBS series The Great British Baking Show, based on the hit BBC TV program The Great British Bake Off. Her focus on family food and on recipes that are no-fuss, practical, and foolproof have won her a legion of fans worldwide. She lives in England and has five grandchildren--with whom she regularly bakes.
If the item details above aren’t accurate or complete, we want to know about it. Report incorrect product info.