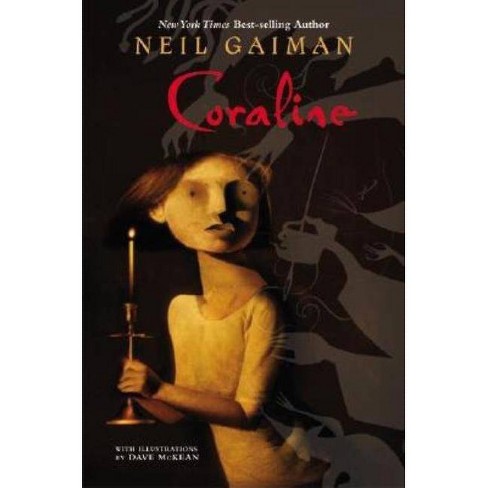 When Coraline steps through the locked doors in her family's new flat, she finds a world which caters to her every whim. But when she wants to leave, things turn unpleasant. Illustrations.

Coraline discovered the door a little while after they moved into the house....

When Coraline steps through a door to find another house strangely similar to her own (only better), things seem marvelous.

But there's another mother there, and another father, and they want her to stay and be their little girl. They want to change her and never let her go.

Coraline will have to fight with all her wit and courage if she is to save herself and return to her ordinary life.

Neil Gaiman's Coraline is a can't-miss classic that enthralls readers age 8 to 12 but also adults who enjoy a perfect smart spooky read.

The day after they moved in,
Coraline went exploring....

In Coraline's family's new flat are twenty-one windows and fourteen doors. Thirteen of the doors open and close.

The fourteenth is locked, and on the other side is only a brick wall, until the day Coraline unlocks the door to find a passage to another flat in another house just like her own.

At first, things seem marvelous in the other flat. The food is better. The toy box is filled with wind-up angels that flutter around the bedroom, books whose pictures writhe and crawl and shimmer, little dinosaur skulls that chatter their teeth. But there's another mother, and another father, and they want Coraline to stay with them and be their little girl. They want to change her and never let her go.

Other children are trapped there as well, lost souls behind the mirrors. Coraline is their only hope of rescue. She will have to fight with all her wits and all the tools she can find if she is to save the lost children, her ordinary life, and herself.

Critically acclaimed and award-winning author Neil Gaiman will delight readers with his first novel for all ages.

"Gaiman's tale is inventive, scary, thrilling and finally affirmative. Readers young and old will find something to startle them." -- Washington Post Book World

"Gaiman's pacing is superb, and he steers the tension of the tale with a deft and practiced narrative touch." -- Bulletin of the Center for Children's Books

"Ladies and gentlemen, boys and girls, rise to your feet and applaud: Coraline is the real thing." -- Philip Pullman, The Guardian

"The most splendidly original, weird, and frightening book I have read, and yet full of things children will love." -- Diana Wynne Jones

"It has the delicate horror of the finest fairy tales, and it is a masterpiece." -- Terry Pratchett

" Walk through the door and you'll believe in love, magic, and the power of good over evil." -- USA Today

"So wonderfully whimsical that readers of all ages will hungrily devour itCoraline is destined to become a classic. -- Globe and Mail (Toronto)

"Chilly, finely-wrought prose, a truly weird setting and a fable that taps into our most uncomfortable fears." -- Times Educational Supplement

"A deliciously scary book that we loved reading together as a family." -- Orson Scott Card

"A frighteningly realistic fantasy. Lean crisp prose adds to the suspense and propels the story, and the eerie black-and-white illustrations by Dave McKean heighten the nightmarish quality of the tale." -- Voice of Youth Advocates (VOYA)

"Kids will hang on every word. Coraline is a character with whom they will surely identify, and they will love being frightened out of their shoes. This is just right for all those requests for a scary book." -- School Library Journal (starred review)