Creatures of Light and Darkness - by Roger Zelazny (Paperback) 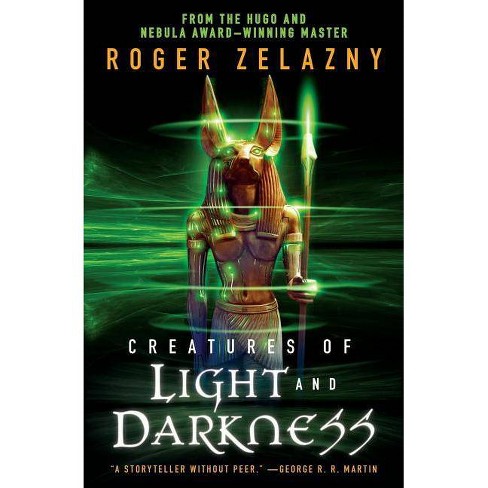 Finally back in print--the legendary science fiction master's seminal tale of a battle between ancient Egyptian gods, set in a faraway world.

"Nobody else made myths real and valuable in the way Roger Zelazny could."
--Neil Gaiman "He writes about science as if it were magic and magic as if it were science."
--New York Times Book Review

The author of more than 50 books and winner of multiple Hugo and Nebula Awards, the incomparable Roger Zelazny remains one of the most revered names in sf and fantasy. Back in print at long last is the master's classic novel Creatures of Light and Darkness. Set on a faraway world, the seminal tale of a battle between Ancient Egyptian gods, Creatures of Light and Darkness is a grand display of the imagination, wit, and audacious genius that has placed Zelazny eternally alongside Heinlein, Asimov, Phillip K. Dick, and other legendary genre masters.

Two gods, two houses, one quest, and the eternal war between life and death

To save his kingdom, Anubis, Lord of the Dead, sends forth his servant on a mission of vengeance. At the same time, from The House of Life, Osiris sends forth his son, Horus, on the same mission to destroy utterly and forever The Prince Who Was a Thousand.

But neither of these superhuman warriors is prepared for the strange and harrowing world of mortal life, and The Thing That Cries in the Night may well destroy not only their worlds, but all mankind.

As Zelazny did with the Hindu pantheon in the legendary, groundbreaking classic Lord of Light, the master storyteller here breathes new life into the Egyptian gods with another dazzling tale of mythology and imagination.

"He was a poet, first, last, always. His words sang. He was a storyteller without peer. He created worlds as colorful and exotic and memorable as any our genre has ever seen."--George R. R. Martin
If the item details above aren’t accurate or complete, we want to know about it. Report incorrect product info.