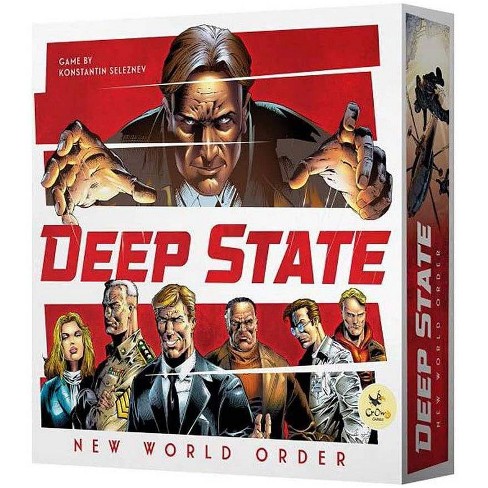 2 out of 5 stars with 3 reviews
33 ratings
WARNING: choking hazard - small parts. Not for children under 3 yrs.

It is the time of the 20th century, a century of skyrocketing technological development, a century of new economic and political relations, a century of two World Wars, a century of revolutions. For the first time in history, the creation of a single world government became possible. You command a subdivision at ""The Committee"" — a secret organization working towards becoming that government.

During the game, you dispatch your network of agents to infiltrate political, financial, and research institutions. You make treaties with prominent organizations, both well-known and secret, and carry out covert operations. You head up history-shaping projects, including Comintern and Unified Nations. Most importantly, you compete with other subdivision heads to become the only puppet master of the world!

All you do is shrouded in secrecy. The world knows nothing of you, and it will stay that way. Even as you stand at the head of The Committee and become the ruler of the world!

Deep State: New World Order is a dystopian game of world domination and global conspiracies. The game takes place over several rounds, and in the course of a round, players begin with the action phase, which is followed by the takeover phase. Those two phases repeat, then at the end of the round comes the treaty phase.

During the action phase, each player performs one action, the most important of which is to send your agents to infiltrate political, financial, and research institutions represented by objective cards in the Infiltration Zone. You must race for objective cards as other players can send more agents to intercept the card they need. Players can also advance toward World Domination projects, including Comintern, Unified Nations, Spyware, and Deep State itself, which gives players tangible advantages in the game. They may also choose to carry out covert operations that provide a lot of influence while requiring the sacrifice of agents.

During the takeover phase, players take their captured cards and return some of their agents from them.

The treaty phase begins when all objective cards in the Infiltration Zone have been captured. Each player can then make one treaty that gets them working with mighty organizations, some known the world over, while others hide in secret.

At the end of the game, players calculate their influence (victory points) that are generated by their objective cards, by participation in global projects, and by their treaty cards. Many cards interact with each other, generating even more influence. The player with the most influence wins the game, becoming master of the world we know.
If the item details above aren’t accurate or complete, we want to know about it. Report incorrect product info.