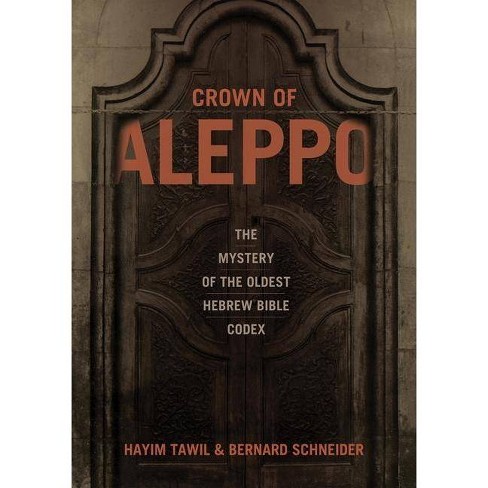 $39.49
no reviews yet
be the first!be the first! ratings
Shipping
Free standard shipping with RedCard
Loading, please wait...
Help us improve this page

Thanks to this generous donor for making the publication of this book possible:
Jack B. Dweck.

In Crown of Aleppo, Hayim Tawil and Bernard Schneider tell the incredible story of the survival, against all odds, of the Aleppo Codex--one of the most authoritative and accurate traditional Masoretic texts of the Bible.

Completed circa 939 in Tiberias, the Crown was created by exacting Tiberian scribes who copied the entire Bible into book form, adding annotations, vowel and cantillation marks, and precise commentary. Praised by Torah scholars for centuries after its writing, the Crown passed through history until the 15th century when it was housed in the Great Synagogue of Aleppo, Syria. When the synagogue was burned in the 1947 pogrom, the codex was thought to be destroyed, lost forever.

That is where its great mystery begins. Miraculously, a significant portion of the Crown of Aleppo survived the fire and was smuggled from the synagogue ruins to an unknown location--presumably within the Aleppan Jewish community. Ten years later, the surviving pages of the codex were secretly brought to Israel and finally moved to their current location in the Israel Museum in Jerusalem.

This wonderfully rich book contains more than 50 rare photographs and maps, some in full color, including those of the Aleppo Codex, the Great Synagogue of Aleppo, and of the people who played a part in its rescue.