Crown of Midnight - (Throne of Glass) by Sarah J Maas 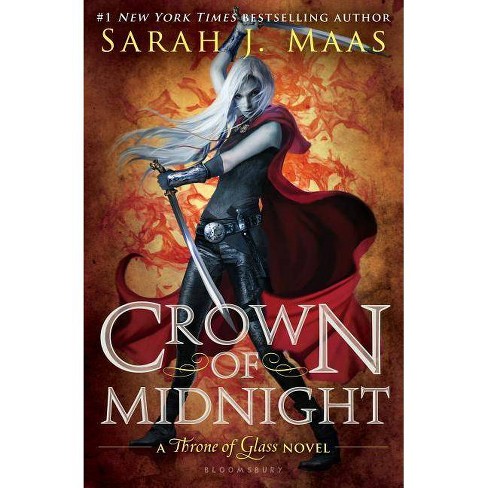 Packed with heart-stopping action and breathless romance, this follow-up to Maas' debut "Throne of Glass" chronicles the next chapter of cunning assassin Celaena's story.

She is the greatest assassin her world has ever known.
But where will her conscience, and her heart, lead her?

After a year of hard labor in the Salt Mines of Endovier, eighteen-year-old assassin Celaena Sardothien has won the king's contest to become the new royal assassin. Yet Celaena is far from loyal to the crown - a secret she hides from even her most intimate confidantes.Keeping up the deadly charade-while pretending to do the king's bidding-will test her in frightening new ways, especially when she's given a task that could jeopardize everything she's come to care for. And there are far more dangerous forces gathering on the horizon -- forces that threaten to destroy her entire world, and will surely force Celaena to make a choice. Where do the assassin's loyalties lie, and who is she willing to fight for?

An epic fantasy readers will immerse themselves in and never want to leave. - Kirkus Reviews, starred review, on Crown of Midnight

Readers seeking the political intrigue of Kristen Cashore's Graceling and its sequels or the deadly competition at the heart of The Hunger Gameswill find both in Maas's strong debut novel. . . . The verve and freshness of the narration make for a thrilling read. - Publishers Weekly, starred review, on THRONE OF GLASS This commingling of comedy, brutality and fantasy evokes a rich alternate universe with a spitfire young woman as its brightest star. - Kirkus Reviews, on THRONE OF GLASS THRONE OF GLASS by Sarah J. Maas is a tale full of surprises and shadows, where deadly seeds are sown with the promise of more danger to come. A fascinating glimpse into the dark side of Cinderella. - Colleen Houck, the NYT Bestselling author of the Tiger's Curse series

Sarah J. Maas is the #1 New York Times and internationally bestselling author of the Throne of Glass series, as well as the Court of Thorns and Roses series. Her books are published in over thirty-six languages. A New York native, Sarah lives in Pennsylvania with her husband and dog.

www.worldofsarahjmaas.com
www.facebook.com/theworldofsarahjmaas
Instagram: therealsjmaas
If the item details above aren’t accurate or complete, we want to know about it. Report incorrect product info.