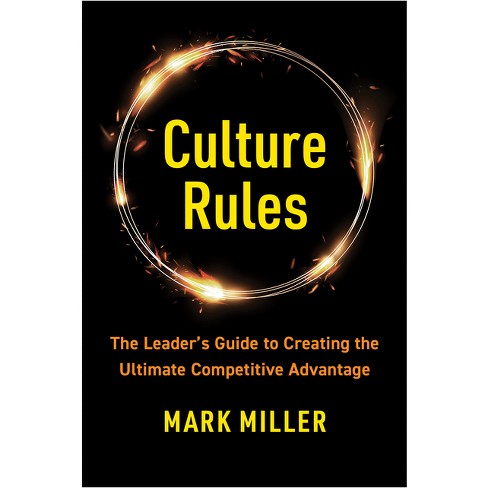 "Culture Rules makes the case for why leaders should invest their time and energy on building culture and gives them three simple, actionable rules they must play by if they want to stay in the game and win!"--

Culture Rules is a clarion call for leaders around the world. The pandemic has magnified the essential role that culture plays in an organization's health, vitality, and sustainability--some passed the test with flying colors while others are seeing with fresh eyes, deeply rooted issues and challenges within their culture. After completing a global study with over 5,000 participants from ten countries, Mark Miller and his team have exposed the most predominant fissures and their fixes. Culture Rules showcases leaders and organizations who are building strong, enduring cultures. Most important, this book is not just another compilation of case studies. Culture Rules makes the case for why leaders should invest their time and energy on building culture and gives them three simple, actionable rules they must play by if they want to stay in the game and win! These rules and their accompanying best practices enable leaders to:
When leader's play by these rules, their actions become more strategic and productive while giving their organization a huge gift--a place where untapped potential is released and transformed into performance. Culture Rules!

Mark Miller is Vice President of High Performance Leadership at Chick-fil-A, as well as a bestselling author, leadership coach, and highly-sought-after speaker. He began his career at Chick-fil-A more than 40 years ago as an hourly team member in one of the local restaurants. Shortly thereafter, he became the sixteenth corporate employee when he went to work in the warehouse. Since that day, Mark has worked in many departments throughout the company. He started the Corporate Communications Group, and the Quality & Customer Satisfaction Team, and also led Restaurant Operations, Training & Development, Leadership Development, and more. Today, Chick-fil-A sees annual sales of over $13 billion. In addition, Mark has had the privilege of teaching, coaching, and leading non-profit organizations both domestically and globally. For the last twenty years, Mark has spent his time serving leaders: helping them grow themselves, their teams, and their organizations. He has authored nine books to date, including bestsellers The Secret (with Ken Blanchard) and The Heart of Leadership, with more than one million copies of his books in print in twenty-five different languages. All of his books have been based on new research including front-line interviews with a variety of highly-successful leaders and companies around the world.
If the item details above aren’t accurate or complete, we want to know about it.

The Fifth Risk - by Michael Lewis

The Heart of Leadership - by Mark Miller (Hardcover)

The 8 Rules on being the best RDA - by CL (Paperback)