Cycling in Chicago - (Images of America) by Chris McAuliffe (Paperback) 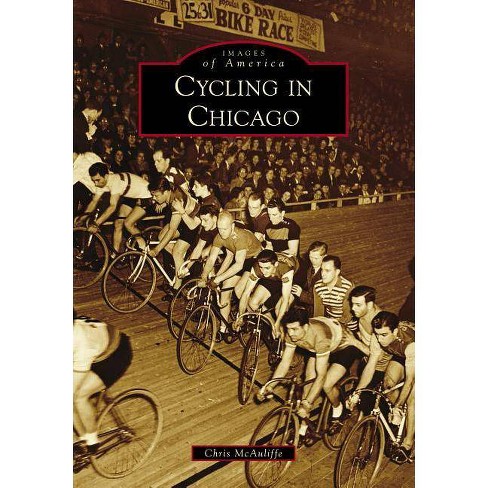 In the late 19th and early 20th century, Chicago was the center of bicycle manufacturing in the United States. As an early industrial and transportation center, two-thirds of all bicycles manufactured in the United States were from Chicago--it was the Detroit of bike manufacturing. For decades, Chicago was also a center for cycling track and road racing. Six-day races drew capacity crowds at the Chicago Stadium, Chicago Coliseum, and International Amphitheatre. Road and track competitions were also held at Sherman Park, the Humboldt Park Velodrome, and on Chicago's famed Magnificent Mile. Today, Chicago is a hub for recreational cyclists. Hundreds of miles of bike lanes, rail to trails, and bike paths, such as the Illinois Prairie Path, the Bloomingdale Trail, Lakefront Path, and the Big Marsh, provide cyclists with numerous recreational and commuting options in a crowded urban environment. Chicago was awarded Bicycling Magazine's Best Bike City of 2016.

I really enjoyed Cycling in Chicago. McAuliffe did a great job digging up photos and wrapping them into chapters that cover the history of cycling in the city. If I had one quibble with the book, it would be for more words! I may be a bit biased as a writer, but I like words. I think the chapter intros could have been a bit longer by incorporating info from the captions into more of a narrative. However, the captions are meaty and do a good job of telling the story alongside the photos, so there's certainly not a lack of storytelling.
If you are from the Chicago area and like bikes, Cycling in Chicago is probably right up your ... lane. The book is also likely to be of interest to anyone who wants to learn about the history of urban cycling in a city that has seen a rebirth as a cycling hotbed thanks to investment in infrastructure and events to promote the activity. Cyclocross Magazine
If the item details above aren’t accurate or complete, we want to know about it. Report incorrect product info.