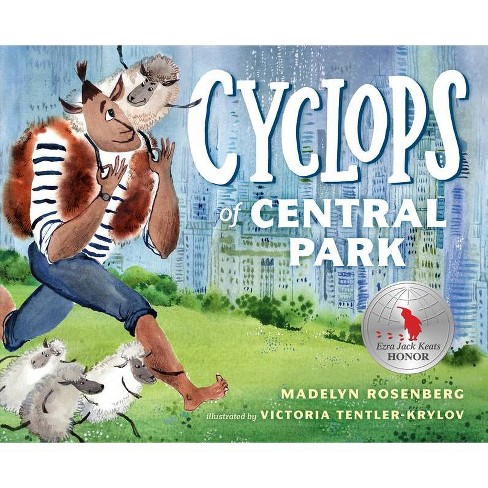 Timid Cyclops ventures out of his cave in Central Park to seek Eugene, a daring sheep missing from his flock, all across New York City.

Featuring a most unusual protagonist, Cyclops of Central Park dares readers to be brave and explore the world because, really, you never know what you might find... Late at night, just before he closed his eye and went to sleep in his Central Park cave, Cyclops counted his sheep. When the sun rose, he counted them again, and that's when he noticed--. . . sixteen, seventeen . . .--one of them was missing. He knew who it was, of course. Eugene? It was always Eugene. Cyclops knows the world is a scary place: the grass is too sharp, the carousels are too twirly, and not all restaurants serve spaghetti. If the world isn't safe for a cyclops, it certainly isn't a safe place for a missing sheep! And so he sets off to face the many dangers lurking in New York City to bring Eugene home. To do so, he will have to face his fears and call for some reinforcements--his other fluffy sheep friends back at the cave. Together, they just might find Eugene and have a fun time in the city. Which goes to show, there is no place like home, but sometimes new experiences make our world a bigger and brighter place.

Praise for Cyclops of Central Park

"In both premise and detail, Rosenberg employs a sly sense of the absurd. . . [and] Tentler-Krylov's wildly creative illustrations are fantastical renderings of New York City as it exists in a kind of alternate reality. . . Young readers will see Cyclops' loving nature and cheer his new bravery. Delightful, witty, and not just for New Yorkers." --Kirkus Reviews "Rosenberg's heartfelt narrative captures the very real anxiety that crowded spaces, especially congested cities, can cause. Tentler-Krylov's fanciful mixed-media art adds even more humor and gravitas to the text, with the protagonist's expressive faces sure to elicit giggles. . . Perfect for New York City-themed read-alouds and interactive lap-sits. A great addition to libraries serving young readers." --Booklist "Nods to many New York City sights and institutions--The Guggenheim, Time Square, Yankee Stadium, the Statue of Liberty--are woven into the text and background art, which makes the fun journey worthwhile . . . [while] the illustrations capture the magic of the city and show the beauty of life and adventures with friends. VERDICT This lighthearted and clever tale will be a hit for storytime and one-on-one sharing." --School Library Journal

Madelyn Rosenberg grew up on a dead-end street with woods, a creek, and copious amounts of mud. She spent more than a decade at a daily newspaper writing stories about colorful, real-life characters. These days she enjoys making up characters of her own and is the author of several children's books including Take Care, This is Just a Test (co-written with Wendy Wan-Long Shang), How to Behave at a Dog Show, and the Nanny X series. Victoria Tentler-Krylov grew up in Saint Petersburg, Russia, and studied architecture and urban design at Cooper Union and Columbia University. A practicing architect now living outside Boston, Victoria is continually inspired by urban landscapes but also by fantasy, possibility, and imagination. Victoria's artwork has been published by Pink Giraffe Books in Russia and by The Wall Street Journal, The Boston Globe, and Flutter Magazine in the U.S.
If the item details above aren’t accurate or complete, we want to know about it. Report incorrect product info.